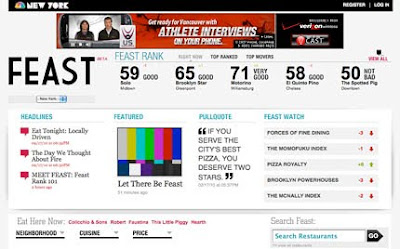 Ben Leventhal, who started Eater, has launched Feast starting in New York. (Don't go to Feast.com, though - I guess they don't own the domain.) NBC Universal is behind the site, which is most similar to Urbanspoon in concept of aggregating reviews and blogs, but with a newsier, bloggier feel and a Metacritic-like rating system for averaging reviews. The site has launched in New York and Miami and is coming soon to Los Angeles and Chicago. The Epicurious blog points out that it's not very transparent, since the site doesn't disclose how reviews are weighted. I'm more interested in why NBC Universal believes in this, especially since I thought CBS Interactive had backed off somewhat on developing Chow.
Do you think you will trust the weighted scores to decide on which restaurants to choose?
at 8:27 AM

Feast sounds nice and all, but I think I'll be sticking to word of mouth recommendations and blogger reviews -- my two go-to sources for eating ideas.

I really find that every sale from chowhound to CNET to CBS has greatly diminished the product over time. Today chowhound is yelp light!
Local bloggers do a much better job, are more current and consistent, and by selective choice, may be more local to your specific requirements.