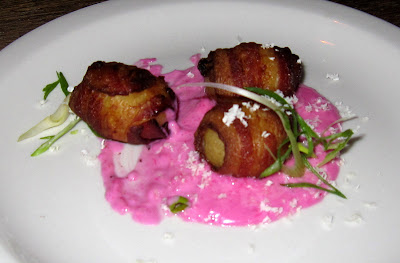 Are chefs so obsessed with novelty that they feel the need to create unholy alliances of national cuisines? Apparently so, because chef Ilan Hall, Top Chef season 2 winner and the child of Scottish/Israeli parents, apparently felt the need to pioneer Scottish-Jewish cuisine at The Gorbals, although no one had previously articulated the need for those cuisines to get cozy with each other. The Gorbals is tucked deep in the belly of the Alexandria Hotel Downtown -- a fine place to see Wall of Voodoo in 1985, but diners at the Gorbals will still have to traverse a grungy underground garage (if you park in the building), then navigate the lobby shared by the hotel's residents. 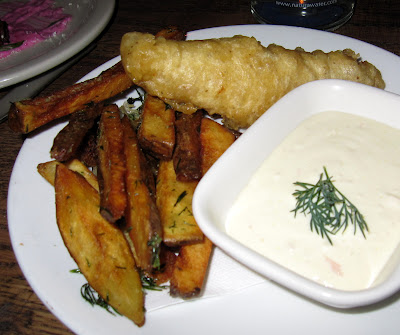 The windowless room has spare wooden benches and long wooden tables, with a small bar on one side and a menu that's only written on the blackboard. One signature sandwich, made of gribenes or rendered chicken skin gribenes, is crossed off the blackboard when we arrive for lunch -- fortunately another specialty, bacon-wrapped matzoh balls, are still available. I order fish 'n chips, and the fish is ok -- not as good as Golden State --with the slightly-overcooked fries that have also gained admirers; I like the fries, though others find theirs unbearably salty. We have to keep asking for explanations on the many white sauces that accompany the dishes -- the tartar sauce is nearly indistinguishable from the aioli or the chestnut sauce.
Salty bacon is a good foil to the matzoh balls, making this one of the most successful dishes we try. Butternut squash latkes are a little greasy and flaccid, while a bbq brisket sandwich is oversauced. We're left with the impression that every dish is doused in liquid smoke -- a pall of salt, smoke and grease seems to hang over the table, especially as we've forgotten to order a salad or vegetable side. Plus, there's no iced tea served at lunch, just sodas and very sour limeade. 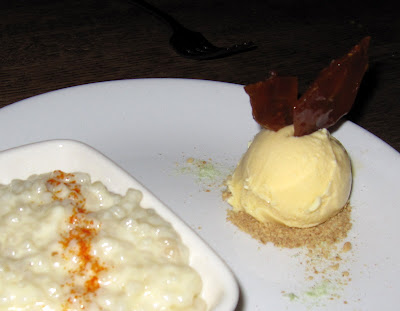 Desserts are equally haphazard -- sticky toffee pudding is irresistibly rich, but Israeli couscous "rice" pudding with pumpkin ice cream topped with bacon brittle (above) doesn't taste of bacon or pumpkin at all.
Some of these dishes, like the fries and matzoh balls, might be perfectly fine if you're just stopping by for a beer or some Scotch late at night, and maybe when the place is full the whole conceit works better. And the prices are fairly reasonable. But for the most part, The Gorbals seems to have achieved much the same thing as my Jewish grandmother -- the cooking manages to leach almost all the flavor out of the food except salt.
The Gorbals
501 S. Spring St.
213-488-3408

The menu just doesn't appeal to me at all, and your review confirms my concerns: it's just too all-over-the-place. Too bad, I liked Ilan in Top Chef.

Unholy alliance? Ouch. I had a fairly positive experience at The Gorbals. My favorite dishes were the bacon-wrapped matzoh and the cous cous "pudding." During my visit, the ice cream was cookies and cream. I'm with you on the butternut squash latkes. They could have been crispier, and that chestnut foam was bland.

Haha, I didn't even know what dishes to expect when you said Jewish-Scottish food! Now that I know, I'm still skeptical. I guess adding bacon is always good.

I gather the problems were with execution, rather than concept. Maybe he'll have enough time, and enough smarts, to refine things.

As for the Alexandria, I guess that's the only place I didn't see Wall of Voodoo, but I did see an excellent Husker Du show once in the second floor ballroom.

Hmmm...maybe it was Husker Du. It's possible my memory is failing me. Perhaps Wall of Voodoo was at the Park Plaza? In any case, the second floor ballroom looks EXACTLY the same, and the bathrooms shared by the restaurant and the ballroom also haven't been touched in 25 years.

You just crack me up, Pat.

I haven't had lunch at the Gorbals but I did enjoy my dinner - esp the Chestnut cream which and the grilled octopus. I agree the desserts were negligible though. Maybe Ilan's Jewish grandma takes over the stove during noon?

The rhetorical answer is a resounding: "no". And P doesn't need a second visit to justify her gut feeling.

Okay, what in the hell does "Bacon" have in common with ANYTHING Jewish. This menu is so clueless and poorly thought out.

That's scary if the ballroom hasn't changed: I'm pretty sure Lucinda Williams played there. Missed Wall of Voodoo and Husker Du. Is there red flocked wallpaper still there? That's my memory of the place.

Next time you're downtown try Drago Centro--they're putting in a panini press at lunchtime. Great outdoor patio--on a nice day, of course.

Salty bacon is a good foil to the matzoh balls."

Had dinner at The Gorbals over the weekend - admit that the menu is unconventional - as spare as the decor. Found it very interesting and different. The baked marrow with garlic toast was unbelievably delicious.

We really enjoyed the odd Gorbals lunch, and I loved the fries, of course. Yet the restaurant in its overall context is the most reluctant agent of gentrification I've ever seen. (Love all these L.A. concert memories, BTW.) Plus the space could use the help a more skilled designer; it's a fine line between an elegantly and depressingly minimalist DIY feel.

I hope all the people that try promote negativity with new businesses realize that they really don't want the economy to recover and they are really just encourage misfortune on those trying to take risks. If you have a bad review to write, please save it, unless you want to pay for the bills and expenses you will cause will you help good people go out of business. There is no better time then now to practice, if you don't have anything nice to say don't say anything at all, or like I said, please be willing to foot the bill for all those trying to do something good for the economy.

This may be the weirdest restaurant concept ever. Do they have matzoh haggis? Short bread rugelach? Loch Ness gefilte fish? Manischewitz & Scotch cocktails?

Hi Anonymous,
I do worry about hurting people who are trying to make a living, but I think the people are interested in talking about this restaurant (your restaurant, perhaps?) shows they're interested in what's going on there, which is good publicity. I tried hard to find as much positive as possible to say. But I would think that everyone who writes a book, makes a movie, opens a restaurant or designs a line of clothing knows that at some point they will be evaluated for it. Good restaurants usually survive no matter what the critics say. Restaurants lacking what people want won't survive no matter how many writers write about them.

i have to agree with pat. if you open a restaurant, and take people's money, then you have to be willing to take a critique. her review is not vicious, but well thought out. its only one opinion too. i agree sometimes that a bad review can hurt, but its all part of the business. this is how we grow, he we produce better art, and a better economy. we have to be truthful, and if all we did was print positive reviews, than what good would that do? its kind of pointless isn't it? even after her review, i still want to go check out the gorbals, and i will go with an open mind. i want to support new chefs in this city, but lets be honest, this is a cut throat business, and he is a high profile chef since he was on the show. its a curse and a blessing.


this is from someone who has been in the restaurant bsuiness for over 15 years now.

I guess I'm gonna have to try this place, someone once said, any press is good press!

I wanted to like it, honest, but it just wasn't very good. Considering he had huge PR boost from Top Chef, I'm not feeling all that bad about not wanting to go back--places without much name recognition but with tastier food win my heart.

Maybe it's time to re-review The Gorbals. Was in for dinner last night and everything was AMAZING!!! They have come a long way and deserve another review as this on is obviously no longer pertinent.