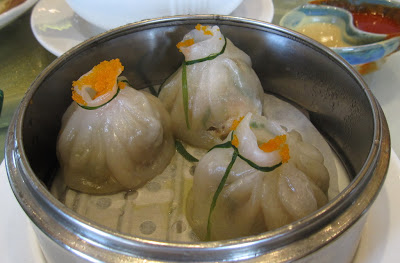 Foie gras dumplings appear on the menu as fro gura dumplings; they're earthy, nicely packaged and worth the upcharge.

If you're like me, you probably started eating dim sum at a vast banquet hall like Ocean Seafood Downtown or Harbor Village in Monterey Park, where stern ladies pushed carts around the room, laden with greasy, delicious, but often lukewarm puffy pork buns and the slippery goodness of har gow dumplings. Maybe you moved on to start ordering from the menu of sophisticated dim sum at Sea Harbour, which made a trip to Rosemead well worth the effort.
Lunasia in Alhambra, a descendent of Triumphal Palace formerly in the same spot, adds several more items to the canon of nouveau style dim sum, for a mostly pleasing result. 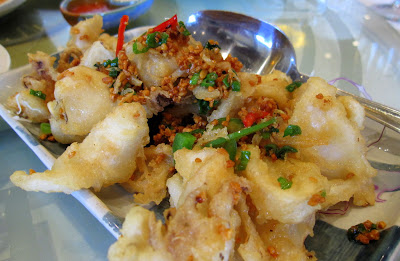 Salt and pepper squid with garlic is better than most other versions of fried calamari, though the briny ocean flavor is more pronounced than most. 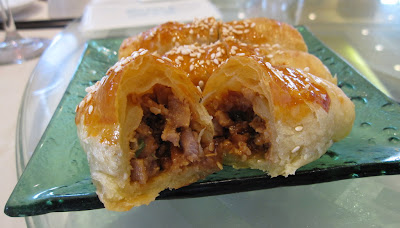 Crispy duck pie in a flaky puff pastry is a more sophisticated take on the bbq pork bun, but with a similar interplay of sweet, meaty and doughy. 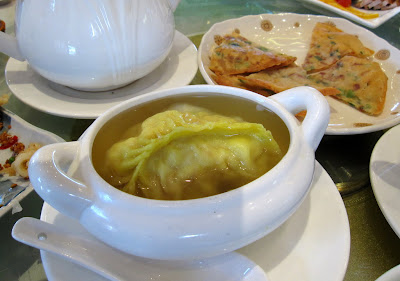 Shark's fin dumpling is a ginormous specimen floating in a light broth, sort of a won ton on growth hormone. This one didn't wow me, with almost too-subtle flavors, but it's hard to share a dumpling the size of a kid's head with your fellow diners.

Marshall from Fooddigger came along with two red wines, I think a Barolo and a Nebbiolo, as he wanted to see how Italian reds would pair with dim sum dishes. They might have overwhelmed the more delicate seafood dumplings, but were perfect with pork belly and

sliced char siu pork. We also liked the traditional har gow and shu mai, shrimp noodle and a thin, crispy bacon scallion pie (right) that should really be a bar snack served everywhere.
Lunasia has a nicer atmosphere and prices are slightly higher than the sling-the-buns on your plate kind of place, but it's worth it to have a less frenetic experience. Plus, they accept reservations for groups.

Love all your posts!