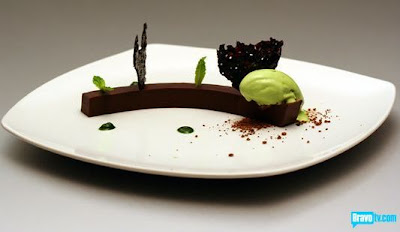 I wouldn't mind this silky ganache with spearmint ice cream right this minute.

Quickfire challenge: The Voltaggio brothers are arguing all the time. Everyone thinks Robin should have gone home. Now that it's down to only eight chefs, everyone is increasingly crochety. So when they choose teams, Robin is picked last, of course, on the brothers red team. On the blue team, Jennifer is called out by restaurant owner Rick Moonen for calling her black cod trout.
The winners and losers: The blue team wins for the black cod with mushrooms and shitake broth. Both the brothers on the red team both pout like bad losers.
Elimination round: The chefs must create two complete restaurants, upstairs and downstairs, concentrating on the front of the house as well as the kitchen.
Since Moonen's rm restaurant specializes in sustainable seafood, they must pay attention to the Monterey Bay aquariam's Seafood Watch card to help choose their seafood. The chefs stay pretty conservative with their seafood choices, usually going for either Arctic char or black cod.
The restaurants: OMG, is Revolt the worst name for a restaurant ever or what? In fact, it's revolting.
The other team's choice, Mission, is a little boring but you can totally imagine a restaurant being named that.
Oh, the drama: Michael doesn't like how Robin is plating the pithiviers, and she tries to grab back her pastry, telling him to "screw off." "Don't cuss at me again!" he snaps angrily. These people are just about at boiling point.
I'd totally eat that: Bouillabaisse looks pretty good, but then I'd eat rouille spread even on asphalt shingles. Still, cooking the shellfish to order was apparently the wrong move.
The winners: Despite the stupid name, Revolt takes the prize. The judge like Michael's chicken with calamari "pasta," Robin's nicely-executed pear pithivier, and the cod with billi billi sauce. Toby proclaims it the best restaurant wars team ever. Michael wins for his chicken and gets $10,000, which he graciously splits with his team members.
The losers: Jennifer is upset, because her trout butter sauce is broken. But its Laurine who is dismissed, because she didn't handle the front of the house well. When Jennifer finds out Laurine is gone, she makes a face like an Arctic char being fileted. Now the only woman are sour-faced yet competent Jennifer and erratic, bitchy Robin. Which do you think will go home first?

Next time: Natalie Portman guests on the show -- but here's a hint of turmoil to come: naturally, she's a vegan.

jennifer's line "I feel broken" was SO GOOD. So glad they spared her.

The brothers were beyond annoying during this episode.

I'm with Doran. I understand casting two people who know each to make for drama, but they're just super annoying and cocky too.

One day Bryan is going to go postal with a meat tenderizer on bratty little bro Mike. You can practically see the steam coming out of his ears.

Jen and Kevin are not only talented, but likeable. I hope they are the top two.

It is all staged especially because they know each other. I dont really care much for the show except seeing new recipes for my San Francisco catering

You do catering in San Francisco too!!! Niiiiice