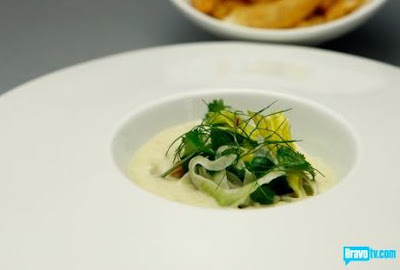 Tonght's guest judge is Charlie Palmer, the pioneer of American cooking. Although Bryan Voltaggio worked for him for 10 years, and brother Michael has also worked with Palmer, he assures that he will be impartial. But increasingly uptight Michael clearly thinks the connection gives him a leg up, while Bryan is afraid maybe Charlie doesn't like him.
One viewer noted last week that the product placement is out of control this season, and in tonight's episode it reached its apex. The snide look on Jennifer's face when she hears they have to create dishes using Alexia salty snacks is priceless. Even the cars are product placement -- what are Venzas?
I'd eat that: Kevin's warm bean confit tomato salad with fresh herbs and creamed corn looks delicious. I hope they post a recipe for that.
Most pretentious award: Did Bryan actually say he was using Soy air? Say what?
Quickfire challenge winner: Eli's potato clam salad with white truffle. Doesn't excite me, but I guess it's better than Robin's sweet corn panna cotta with avocado. Has she never heard of textural contrast?
Elimination challenge: Pigs and Pinot is the name of an annual benefit dinner Charlie Palmer hosts, so that's the theme. Michael reminisces about pate de campagne he once made with Palmer, clearly thinking his history will get him somewhere.
The chefs smile when they hear the ingredients are foodie mainstays pork and pinot noir -- a helluva lot better than onion flavored snacks!
But quel travail: They have to make 150 tasting portions like a real benefit tasting -- what a pain.
Each chef gets to pick the pinot to pair his or her food with: Eli picks a Russian River Terlato, accusing the others of having amateur palates that prefer candy flavored wines. For a 25 year old, he's kind of a wine snob.
But one thing's for sure -- I could sure use a big glass of pinot right now!
Laurine's got balls, figuratively of course -- she decides to try making pork rillettes for the very first time. Not sure if that's a good idea.
Random observation: But seriously, why does Jennifer always look so sour?
Ganging up on the cancer victim: Tension in the house comes to a head while Eli's making dinner. "You're not my mom, Robin!" he kvetches. She says if she were Eli's mom, she would have raised him better. Ouch! But looking at Robin's wizened face is starting to annoy me, so I can see how they feel. During the upcoming challenge, they seem like they're going to hate Robin's dish before they even taste it. "We all know what the right decision is," they say while they're waiting for the decision -- everyone's dying to get rid of Robin.
Sure enough, the Food & Wine editor's assessment of the rillettes is "Catfood." (The tuna rillettes at Palate are truly reminiscent of catfood, BTW.) Bad call for Laurine, yet she gets to stay.
Now that's just gross: Toby Young, as usual is vulgar: The difference between an American pinot and a French wine is like the difference between a shaved armpit and a hairy one, he charmingly posits. Even when Jennifer makes the cut, she looks relieved but not happy.
The winner: Kevin, for his pate, which looks like catfood, but apparently doesn't taste like it.
The Loser: Ash changed his mind and ended up making cold pork.
It seems like they're trying to see how crazy they can drive the other chefs by keeping Robin as long as they can, although her cooking is clearly weaker than the others. Meanwhile, the brothers look like they're about to start punching each other out on front lawn while Robin does her Pilates. With only a handful of chefs left, nearly everyone seems on edge tonight.
at 9:15 PM

I loved Toby's comment. I totally knew what he was talking about when he said it.

Why didn't Eli get the wildcard after winning the quickfire? Luckily for him, he got belly.

I've "beat" (hah!) cancer twice. Big deal. That doesn't make me skilled at cooking. Robin's playing up the cancer card is beyond boring. Would there be the same pity if she had had a heart attack?

Finally, Ash cut his own throat. It wasn't the first time, so the result wasn't surprising. If he'd kept his mouth shut, he probably would have survived the week, though he wouldn't have lasted much longer.

I'm putting my money on Kevin because he's not as uptight as the other three true contenders (Jennifer + 2 bros) and seems really focussed. PS-- why does a guy who was in Charlie Palmer's kitchen for 10 years need to be on Top Chef? Plus he should have won for his steak--I think Palmer was not going to pick his dish no matter what--didn't want to show favoritism but he should have.
And the snack challenge I think backfired because the chefs used them on the side or crumbled them into minute pieces--not really a showcase for the product.