In the news: Must Bar blog controversy, Julie & Julia and sour beer 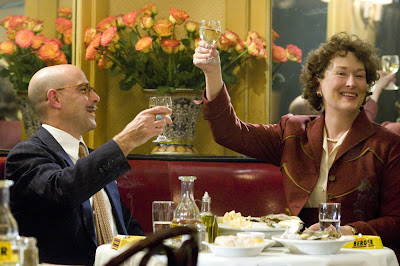 Meryl Streep as Julia Child and Stanley Tucci as her hubby in "Julie & Julia."

Been asleep the last 24 hours? Latest mini-controversy in L.A. food world has EaterLA posting a rather inflammatory email from a tipster about Downtown's Must Wine Bar, Daily Dish following up and now LAObserved posting a response from an actual lawyer. While it's nice to know that blogs are probably legally allowed to post things from a third party, it would also be nice to think that bloggers might think twice before endangering small local businesses.
***
Julie & Julia, the first movie based on a food blog, screened last night and got some favorable Tweets...can't find an actual review yet but here's a mention from Michael Ruhlman. It opens Aug. 7. Did anyone blog about the screening?
***
Josh from FoodGPS does an awesome job introducing readers to the sour beer phenomenon in the LATimes food section...will these beers catch on or are they just too difficult for most beer drinkers to appreciate?
at 9:41 AM

Whoa, what a train wreck re. The Must! And what a shame. I wonder how this will all shake out.

A movie based on a food blog? CRAZINESS!!!

I saw a screening of Julie and Julia last night. I thought it was a cute film. Meryl Streep as Julia Child was wonderful. I think she really captured Julia's essence.