Domenico: A touch of class in Silver Lake 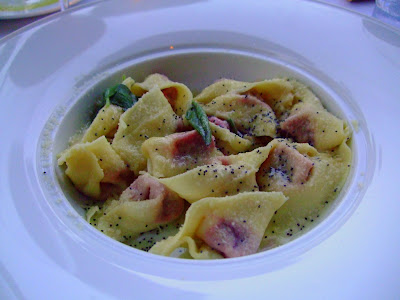 If Elf Cafe is the ultimate new Echo Park restaurant -- earthy, earnest, filled with bearded guys and deer etchings -- then Domenico is emblematic of moneyed, older Silver Lake, where even modest houses are still going for a cool million. What the two restaurants do share is friendly, attentive service and the ability to bring your own wine, with no corkage. The interior of Domenico looks much better than when it was Michelangelo, very white and elegant. But most people want the sidewalk tables -- despite the occasional firetruck or dogfight, they feel more airy and happening (You might even have a Miranda July sighting, like we did.) Despite a few uneven dishes, there's something about Domenico that briefly gives you the illusion of eating in a cafe somewhere like Cannes, which is a pretty seductive illusion.
Owner Domenico Frasca was a former waiter at Drago, while his chef Michael Young has also cooked at Italian establishments around town. We first met Domenico at a special tasting dinner for writers, but the restaurant had such a pleasant feel I returned on my own dime a few weeks later for a friend's birthday. Many Italian menus make me scream with boredom, but Young's menu is quite a bit more interesting than the usual. Most of the pastas are homemade, and they're much better than the nettle risotto we tried. 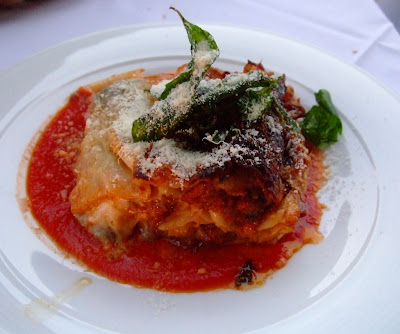 Beet tortelli isn't as sweet as the more familiar squash tortelli, but it has a similar taste with a lovely purple hue. They do a nice job with fried zucchini flowers stuffed with mozzarella and anchovies, but the Caesar salad was a very sorry specimen with brown lettuce served on a warm plate. Lasagna with oxtails (above) is complex but not too heavy, but if they have a special of cavatelli with Spanish octopus, do not miss it. Whole grilled sea bass with rapini lets you continue the cafe-in-a-Mediterranean seaport fantasy a bit longer, but it's not that exciting. A special of Niman Ranch pork short ribs with blood orange is much better: not terribly Italian, but full of deep, porky flavor.
The verdict? As S. Irene said, Domenico is a big step forward for Silver Lake, and parts of the menu are quite good, while others need more work. But the service is excellent and the setting is pleasant, so try some homemade pasta and see for yourself. Prices are on the higher side -- our dinner of salad, two pastas and one main was $80. Bringing your own wine helps, although they expect to have a liquor license soon.
Domenico
1637 Silver Lake Blvd.
323-661-6166

I love Chef Michael Young cooking. So grateful it's nearby!

MMMM...Niman Ranch pork! Its just like Pat said, it has a "deep porky flavor". It's unlike anything else out there, DEELISH

Thanks for the review. :) I've been curious about Domenico for a while now. I'll have to try this soon.