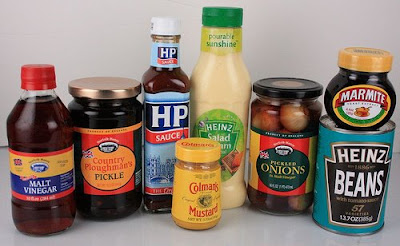 When the first Fresh & Easy store opened, it seems like nearly everyone thought it would be some twee sort of giant Tudor House full of mushy peas and Bisto gravy mix. But of course, that would have been retail suicide, and the first shoppers in Glassell Park were much more interested in their tortilla prices than Marmite. A few early shoppers reported sightings of streaky bacon and British tea, and it seemed like there were more Indian food items than in many stores. But now Fresh & Easy apparently feels it's safe to unleash a few more British foods on us. Their baked beans apparently taste completely different, I'm told...but what is the actual purpose of Country Ploughman's Pickle? Have you seen more British products yet?
at 12:08 PM

country pickle is prolly super similar to bransons pickle; which is like an all purpose condiment but specifically for the famed ploughman's lunch: stilton, fruit, pickle, bread, and ale.

Do you know of a place to buy flavored Heinz beans? When I lived in Australia, I would eat sweet chili-spice beans heated up and served with sour cream. Yum!

PG Tips tea is easy to find, but usually way too expensive. A couple months ago, I found it at F&E for a reasonable price, but when I went back - gone. I hope it comes back!

I hope they start carrying digestive biscuits and hobnobs - again, they're not that hard to find, but so overpriced.

The best prices for British sweets and snacks are found at Hong Kong supermarkets in the SGV and at Indian grocery shops in Artesia. Especially the latter - they have everything.

PG Tips is at World Market, not very expensive.

Mmmm, I LOVE salad cream. If you remember and liked Henri's dressing, try it!

May i ask if you are accepting link exchange with my PR 4 blog. let me know please comment me

I hope they have spotted dick