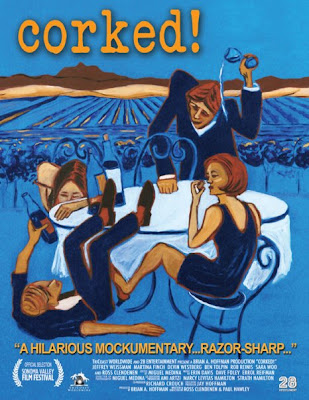 "Corked" first appeared on my radar because a high school buddy, Jeff Weissman, who stars in the comedy mockumentary, has been tireless in promoting the project on his Facebook page.
Now some more buzz is building for this labor-of-love project, made in Sonoma County and directed by Ross Clendenen and Paul Hawley, son of Clos du Bois/Kendall-Jackson winemaker John Hawley. Weissman plays a winemaker based on Hawley in the pic, which takes on the sometimes-pretentious wine biz in the same way "Best in Show" took on dogshows.
Corked opens at L.A.'s Downtown Independent cinema (formerly the Imaginasian Center) on Friday, June 5 and will play for a week with wine tastings every evening, natch.
Here's what the Hollywood Reporter had to say:

Drier and frothier than recent mockumentaries made by recognized Hollywood comics, "Corked!" is a pithy delight. It's a brilliant lampoon of winemaking and will go well with either Milk Duds or organic popcorn. - Duane Byrge

I'm a sucker for mockumentaries--this sounds right up my alley! Thanks for posting!