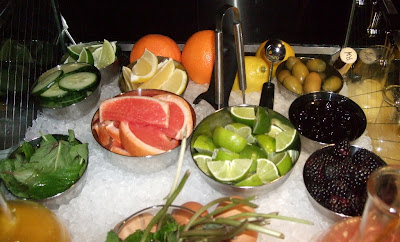 The mixing station at the Varnish includes blackberries and pink grapefruit.

I still hadn't been to Varnish. Kathy wanted to see how Chaya Downtown's happy hour compared to Chaya Venice. And Shelley was game to try anything the near-Eastsiders decreed. So we started Friday's tour of new Downtown spots at Chaya Downtown. I usually dislike places in 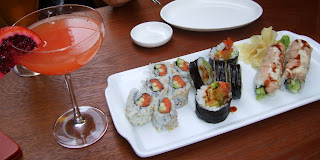 office buildings, but the interior is simply and elegantly designed with a whimsical colorful glass chandelier and only a tiny bit corporate-looking. We sat in outdoor booths that would be great on summer evenings, and ordered Seeing Red cocktails with blood orange and lavender-infused tequila and blood orange juice. They were a touch sweet, but at $5 each, no complaint. A selection of shrimp tempura, albacore and tuna rolls went nicely with the cocktails, at $4 a roll. Chaya Downtown may lack the festive yet slightly sleazy pickup-joint feel of the Venice location, but the value is just as good. 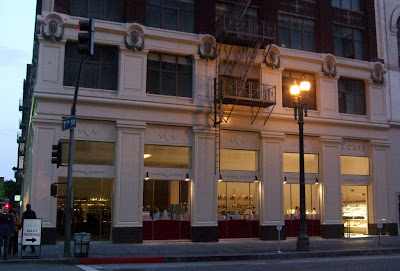 We walked over to Seven & Grand to look at Bottega Louie (above), a beacon of New York-style sophistication in the middle of an area that's still pretty deserted in the evenings. Though full of sushi rolls, we admired colorful macaroons (below), pastries, cheese, lentil salad and other items beautifully displayed in the deli area. Prices looked more reasonable than comparable places like Joan's on Third. The bar and restaurant were fairly full, and the entire vast high-ceilinged space was lively and yet almost incongruous, as if it had been quickly installed like a movie set. 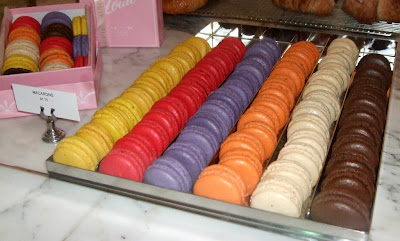 Open from 6:30 am to 11 pm, I imagine it's pretty nifty to have Bottega Louie now open if you live Downtown. Then it was on to the Varnish, the speakeasy-style bar behind a discreet martini glass-marked door at the rear of Cole's. I've noticed that some people seem a little uneasy about talking to the bartender and 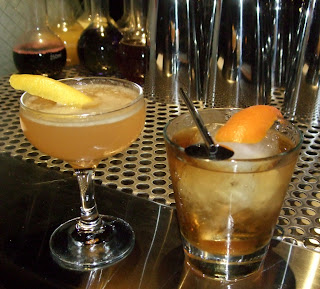 letting him craft something different and delicious. But that's the best part of the new breed of cocktail bars, the chance to try a long-forgotten drink or something completely new mixed exactly to your tastes. After some consultation, the bartender mixed me up a Commando (at right), with bourbon, Cointreau, lemon and "a touch of absinthe." Served in a coupe glass, it had just the right interplay of sour, sweet, herbal and potent. Shelley's had lemon, honey syrup and bourbon over a giant ice cube, I believe, while Kathy had an "updated Sazerac." It was still early, so a visit to the Taco Zone truck was also required before calling it a night. And that's only the tip of the iceberg for cocktails Downtown. ...to be continued, no doubt.
Has anyone eaten at Bottega Louie yet?
at 12:08 PM

what a fun walk around town!

im so excited to go to the varnish...

To begin: I live downtown. We have some of the most wonderful places to dine and drink.
Chaya Downtown is EXCELLENT! We have been a patron of Chaya Brasserie for 20 years and were thrilled that there are here. Check out Drago Centro as well.
Then there is Bottega Louie! OMG!! This place is a shining example of what Downtown is becoming.
Just walking in to look at the way the food is presented is a joy. Not to mention having a Boulangerie and lovely pasteurise. I was blown away when I spied duck confite!!
Don't come here thinking that this is Venice; it's not! Keep your sleaze at the beach, please.

Thanks Greensmark! Obviously I wasn't expecting it to be like Venice, that was sort of tongue in cheek. I've lived near Downtown for more than 20 years but sometimes it's fun to go to the beach and see how people live over there.

Shelley gets around. Lunch with me, dinner with you.

We just went to Bottega Louie this weekend. The wait was a mere 15 minutes at aroun 8PM - and was made even easier by the amazing mixologists working the bar. I am really enjoying this renaissance of fresh fruit juices and natural ingredients in cocktails. On to dinner - prices are more than reasonable, portions generous, and for the most part, everything was good to delicious. The pizza was good - I wouldn't say great (Go to Terroni on Beverly for that) but was good. The crust was crunchy and thin but had a tad bit too much salt for my taste. The ravioli with cream sauce and crispy pancetta was very nice. I'm thinking though, small plates are really the way to go. Burrata and grape tomatoes (roasted btw) was amazing - creamy, decadent Burrata (and heaps of it) with delicate roasted tomatoes at $8 - I could have ordered three and just had that as my meal. Other small plates such as the Portabello Fries and Risotto Balls (I forget their name) are all pretty standard. I thought the stuffed artichoke looked fabulous but heard otherwise. Hmmm.

The restaurant itself is truly beautiful. It has an understated sophistication that says more New York or Boston than "LA". Loved the marble floors and bistro chairs - and open kitchen. It was really an experience and I'm looking forward to many more visits.