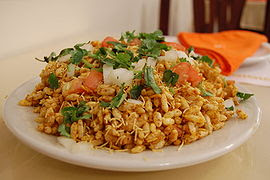 OK, it was bad enough that EaterLA came along two years after I launched EatingLA; now Lesley Balla's new blog ChowBalla follows on my longtime Chowhound handle of Chowpatty! But that's ok, there's plenty of restaurant gossip to go around, and while Lesley's blog has a clever name, it's not the name of a beach in India that's renowned for its tasty snacks. So while Lesley edits the glossier TastingTable, which likely needs to stick to a perky, advertiser-friendly tone, she can funnel some of the gossip and snark we love her for over to ChowBalla. First up: Michael Mina's XIV drops its odd tasting menu policy, which absolutely nobody liked. These days, it's all about pleasing the customer -- what a refreshing concept!
(photo of bhelpuri, a Indian snack found at Chowpatty Beach.)
at 11:49 AM