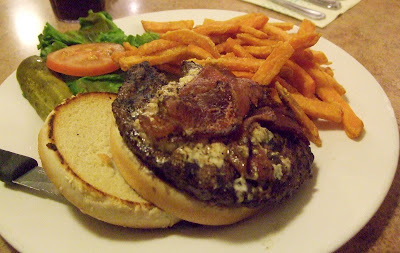 Twohey's Diner is the sort of place you would probably never hear of unless you're within striking distance of South Pasadena or Alhambra. Unlike Fosselman's, which draws curious ice cream eaters from all over L.A., or Pie 'n Burger, Twohey's charms are known mainly to those who went there for ice cream sundaes after their high school football games at various San Gabriel Valley schools. Twohey's underwent an unfortunate remodeling in 1977, which wiped out all the oldschool carhop charm it undoubtedly had since 1943 when it opened. Now it's a barn of a coffee shop filled with kitschy faux-antique signs and many customers who undoubtedly remember its first year in business. Twohey's is famous for the "little stinker" burgers with onions, its onion rings and homemade hot fudge sauce. My patty melt was pretty lackluster, with a tasteless overcooked patty and sweet potato fries that can't hold a candle to Gus's BBQ. But Matt liked his bacon/blue cheese burger, and Sam seemed happy with his onion ring-topped burger and apple pie. I think the trick is to order a half pound burger instead of a quarter pound one to achieve a little more juiciness. We'll probably be back to try the sundaes, the slushy limeade and the onion rings, but if I just want a simple burger, I'll probably go to the In 'n Out next door instead.
at 8:06 PM

I have relatives who live in San Gabriel, so I've passed this place many times.

Agreed, food isn't anything to rave about but the sundae is decent though I'd still prefer Fair Oaks Pharmacy or Fosselman's slightly more.

The sundae's where it's at. Other than that, it's just any other neighborhood diner.

It was a great place to go to in HS for the food. Now not so much. It still represents a bit of nostalgia for Alhambrans who still go there.

I used to go after games in junior high. We always got chili cheese fries and sundaes. I don't remember thinking they were good or bad...it was more about hanging out with my fellow teenagers back then. Thanks for the update!

When I was a kid the Old-Fashioned Burger with cheese was my favorite: a homemade bun buttered and grilled until crispy around the edges, the patty juicy, the cheese melty. Mmmm. That incarnation [heh] is gone, as well as their wonderful au gratin potatoes and their terrific fried shrimp sandwich on buttered white toast. The only thing left intact from the old days are the sundaes - bittersweet or milk chocolate hot fudge and the fabulous hot caramel on Fosselman's vanilla ice cream, all topped with stiff hand-whipped cream and a sour preserved (never Marischino!) cherry.

Do they still make those great hash browns in the little metal tray??