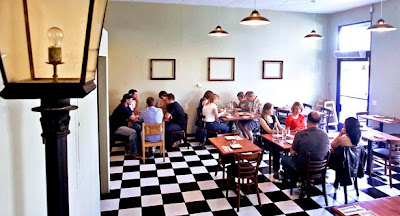 The Park in Echo Park has gotten some grief from the California Alcoholic Beverage Control board for their BYOB policy, and is asking that patrons do not bring alcohol starting after this weekend. That's a real shame as this was what made the restaurant so friendly and affordable, but it begs the question of whether this will be a problem at several other local places that encourage BYOB.
The owner of Michelangelo, for one, says he hasn't been contacted and that it's ok until you receive the window posting from the ABC.
Is it our fault as bloggers and Chowhounds that the ABC caught on to this practice, or would they be policing these restaurants anyway? Hopefully The Park will get a license soon and put this issue to rest, but in the meantime, the restaurant is introducing a new winter menu to help ease the pain. There's some tempting-looking things on the new menu: Bourride, a French seafood soup; braised Kurobata pork belly with Vietnamese caramel sauce and orecchiette with roasted cauliflower, capers and fennel. They also plan to open soon on Tuesday nights with a family style dinner and for lunch as well.

I brought this up on Chowhound and had posts deleted by mods, got grief from other hounds. It is serious and if restaurants do it it should not be bragged about by bloggers. My 2 cenets again. Burger Boy

Kolchak said...
This comment has been removed by the author.
8:57 AM

I Love The Park and the food and kind service/attention is the big reason why... we did enjoy bringing along our favorite wines to go with the fine food, but will still support the neighborhood!