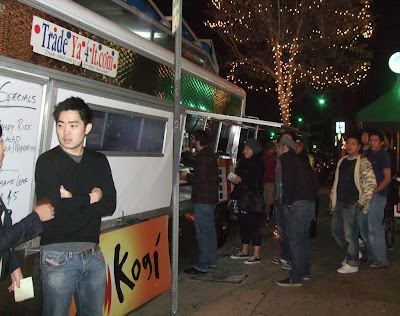 Jeez, the L.A. food world moves fast. Only about two weeks since the Kogi BBQ Korean taco truck started feeding the voracious taco eaters of L.A., and I'm already feeling behind since I haven't tried it yet. I'd heard that the tacos were delicious, but that if you sign up for their Twitter feed, you might hear a little too often about where they're parked. Since I'm still Twitterless, I waited until the truck appeared on my route home at the Sunset Junction holiday fair Friday night and picked up two shortrib and two spicy pork tacos ($2 each). 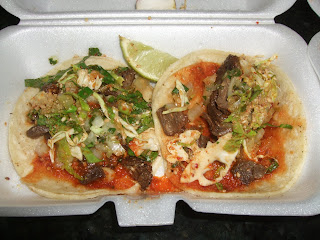 The kimchee and sesame leaf quesadilla special also sounded interesting, but I stuck with the tacos. Sam and I happily devoured them all, and he doesn't even much like spicy food. The spicy pork had just a touch of spice and the shredded pork was tender in a savory sauce, almost reminiscent of cochnita pibil. Shortrib or bulgogi was in kind of large chunks; the meat itself was a little plain and chewy but with the shredded cabbage and sauce on top, it made a lovely package. It would be even more awesome if the kalbi had that sweet, carmelized edge it gets when you cook it yourself in a restaurant, but hey, it's a truck, not a full on barbecue restaurant, albeit one run by real chefs.
"Why didn't you think of this?," a guy playfully harangued his girlfriend as they waited in front of the truck. Indeed -- why didn't we all think of this?

I was just on their web site 30 seconds ago, honest, looking to see where they'd be tonight and tomorrow. Unfortunately I won't be in Silver Lake or Venice, but I am really really looking forward to trying them out. Los Angeles can do with a whole fleet of "taco trucks" serving up good, non-Mexican food, not that there's any problem with the Mexican variety. I really hope this catches on, as long as the quality doesn't suffer.

What do you mean, you're behind? Hey Pat! I still can't quite keep my eyes open late enough to grab a taco from this truck. On New Year's Eve, I'm taking lots of daytime naps so I'll be able to stay awake and try one of those spicy pork tacos! Thanks for the TIMELY review!

Maybe so, anonymous (clever name!) but white people need to eat too. However the crowd in Silver Lake was about half Asian the other night, so I'm not sure everyone agrees.

hey anonymous, i'm Korean and I think the place is pretty damn good, regardless of your race. My other korean friends who've had the tacos also liked it, so I don't know where you get off making comments like that.

This is all hype. There seems to be a double standard in the way we treat people, there have been many Angeleno vendors who have been harassed in areas like Silver Lake and Echo Park because of people who have taken over these areas. This is disgusting that these people who destroyed the lively hood of others are now pretending that taco trucks are some sort of novelty. This is so wrong on many levels. This does nothing for the friction between Koreans and Mexicans. So typical.