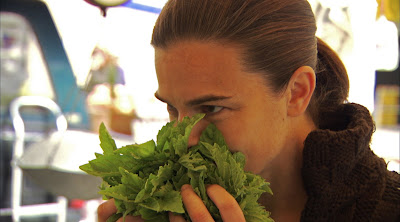 As foodies, many of us are interested in subjects like local, sustainable produce, gardening, farmer's markets, the recent vetoed Farm Bill, healthy school lunch programs, and most of all, delicious, fresh food. Food Fight, which had its North American premiere Saturday at the AFI Fest, weaves all these subjects together and despite the often-depressing state of American agriculture, manages to end on an upbeat note explaining how individuals can help improve the situation.
Campanile owner Mark Peel joined the film's director Chris Taylor and L.A. Times food editor Russ Parsons for the Q & A after the screening. "I've waited since I was 20 to see this film!" exclaimed a middle-aged woman in the audience, which included bloggers Javier from Teenage Glutser and Sharon, from vegan blog To Live and Eat in L.A., who sighed a little every time the film showed an adorable, sustainable baby lamb.
Food Fight has some similar themes as Participant Productions' Food, Inc, which will be released in theaters next year by Magnolia, but focuses more on fresh produce and the chefs that celebrate fruits and vegetables. Both films interview the ubiquitous Michael Pollan, but Food Fight balances the political aspect, like an enlightening interview with Farm Bill sponsor rep. Ron Kind, with a focus on Alice Waters and the birth of the sustainable movement. There's also interviews with many people who knew Chez Panisse at the start such as Jeremiah Tower, and with other culinary stars like Wolfgang Puck and Suzanne Goin talking mostly about how to grow food with the most taste. Lest anyone call these owners of pricey restaurants "elitist," ample time is given to a farm store for low-income shoppers in Milwaukee and Berkeley's revolutionary public school Edible Schoolyard.
"Every time you spend a dollar on food, you're voting for the system that you want," Parsons told the audience. "It's all about enlightened hedonism," concluded Mark Peel.
If you're interested in the politics and taste of the American food delivery system, you'll probably want to see both Food Fight, which also screens at HD Fest in Burbank Dec. 5-7, and Food Inc., which opens in theaters in the first half of 2009.
at 12:18 PM

It was great to meet you Pat... long live the baby lambs! :)