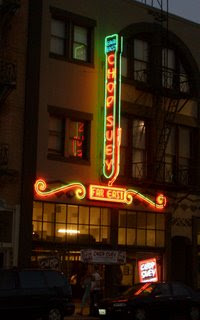 The Downtown News has the story on the closure of Chop Suey Cafe in Little Tokyo. Despite a legacy of many old customers who remember its glory days, the kitchen never found its way. (My early disappointing review got dozens of comments from those whose ties to the place went back decades.) After struggling to replicate the old recipes, Chop Suey gave up and switched to "modern Chinese" fare. As it's a historic landmark, management isn't allowed to make many changes in the vintage interior, which makes it difficult to adapt to the times. But I think having a restaurant run by a community organization is a risky idea to begin with -- except in a very few cases (Homegirl Cafe comes to mind), it seems to work better to run a restaurant with a for-profit mentality that includes accountability to the customers. The cozier Far Bar remains open, and there's plans to re-open Chop Suey as a lounge with small plates. I hope something works out, because it would be a shame to waste the large space and great neon sign in a neighborhood that's really taking off.
at 10:52 AM

I went to Far Bar a few weeks back (see here:
http://potentialisamuscle.blogspot.com/2008/09/so-ya-didnt-get-chance-to-take-me-out.html)

and the kid working the door in front of the Chop Suey said the whole place had been renovated inside. I figured he was too young to know what they meant, but I was worried. It's good to hear that Far Bar will survive, but a real owner needs to buy Chop Suey and protect it. As I wrote:
"Why can't somebody just look at a cool, little piece of our history and NOT say, gee, this'd make a charming Starbucks? God dammit. We don't need another Starbucks. We need to have places we can go to and sit in and look at each other and say, this is like the old days, and then respond, this is the old days, and then we'd smile at each other and order more drinks."

I know the noodles were supposed to be hard on the outside and softer on the inside. That's why I ordered the dish in the first place. I'd had it that way in the past, and missed it, so I ordered it especially for that reason.

But it was bad. Hard on the outside, harder on the inside. There was no warm gravy to help loosen it up, just a few cold veggies. You couldn't cut through it with a hunting knife. The waitress didn't offer to break it up, because she couldn't have broken it up. The jackhammer she'd have to use might have bothered the other diners. It was the very definition of impenetrable. The thought of biting into that ceramic sculpture disguised as special chow mein makes me cringe more than I did in HOSTEL: PART 2.

Never gave them another shot.

The new header at the top of the page is awesome, by the way. Lookin' good!

With great food you should be able to thrive, not just survive.

it's no surprise they clsed food there was really bad!