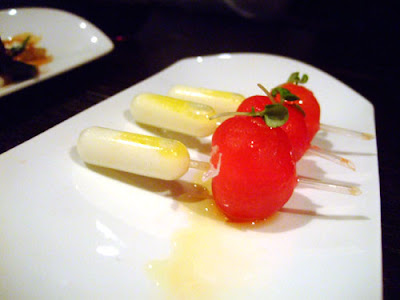 Some bloggers with apparently plenty of disposable income have already hit Jose Andres' Bazaar at the SLS hotel. I really appreciate their effort, but I'm afraid I don't have the attention span for Kevin's rundown of the 49 courses he had. I confess, I skipped to the end: some courses were quite good, while others were frankly awful. Kevin is incensed also that the policy on photograhy is rather erratically enforced -- apparently they really don't want you to take pictures, but sometimes they'll let you if you arrange it beforehand. I don't think they counted on the rather enthusiastic foodbloggers in these parts. Uber-chowhound Exilekiss was there too (not sure if he was with Kevin or not), and seemed a little more enthusiastic, plus he doesn't mention being hassled about photos. Frankly, it all seems a bit much. But in these times, restaurants should probably do everything they can to inspire customer loyalty. You know how those bloggers tend to spread the word.
at 9:26 AM

Given how some foodbloggers freely dispense with flash, I can understand some restaurants' concern with photography (though not strictly banning).

Sidenote: I'm so totally going to confuse this Michael Mina's XIV somewhere down the line

I never understand taking pictures of food with a flash!

I wasn't with exilekiss. He likes to dine early, so may have been gone by the time I started. I bumped into Fiona from Gourmet Pigs, and she also had issues with photography. Perhaps different management was in place while exilekiss was dining?

Also, I definitely wasn't using flash, so bothering others wasn't the issue. I think they're just overly paranoid!

heh, just noticed the edit -- I totally thought there was an XIV hotel coming up!