Gordon Ramsay back for more Hell's Kitchen, Kitchen Nightmares: Which L.A. restaurant would you re-do? 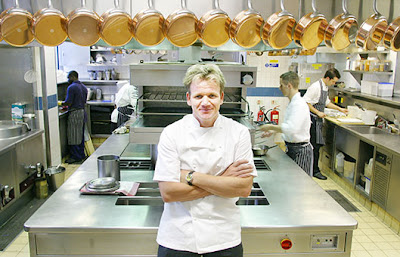 Gordon Ramsay will return to Fox for at least two more seasons of "Hell's Kitchen" and "Kitchen Nightmares," writes Cynthia Littleton in Daily Variety. A cooking special and another, unnamed new series "based on an original Ramsay concept" are also in the works. That guy just does not stop. Although I much prefer the BBC version of "Kitchen Nightmares," the recent Fox "Kitchen Nightmares" two-hour opener was pretty entertaining.
It's a common foodie fantasy: how would we fix this pathetic restaurant if it was up to us? Gordon has already done several L.A. restaurants, but which do you think could still use his help, and how would you re-do them? Put your suggestions in the comments, and then I'll post the best suggestions.
at 8:05 PM

Astro at the corner of Silver Lake and Fletcher. I would make the most of the classic mid-century design, streamline the menu and serve awesome tasty diner food with non-canned ingredients. And serve good coffee!! I'd change the coffee service first. Then I'd run over to Edendale Grill and fix their menu too--decor and bar is fine. Although there's a new chef, it's now satisfactory. It could easily be good to excellent.

I think Doughboys has shown that they could use Hell's Kitchen's help, if it isn't too late already.

Maybe it's too humble to consider, but I'd send him roaring into Puran's on Hillhurst (isn't there another one on La Brea?). Its menu is vague (is it a healthy-food place? comfort food? Italian?) and the food is mediocre...a simple healthy food place would be great for the neighborhood, but Puran's always leaves me wondering, huh?

Judging from the reviews on Chowhound, HIS OWN (The London in WeHo)! For starters see http://chowhound.chow.com/topics/523965

Biffles, I can't agree more. I have a really hard time explaining Puran's to anyone, because I have no idea what it's about. "Soups...and salads? And maybe sandwiches. But not health food. And pasta." So weird.

House of Pies on Vermont and Franklin. They have a C and the service is horrible!!

I'm just re-discovering this show. I saw the follow-up where they showed restaurants he'd done and went back to get an update. I really like the new show format and think he's better utilized in real life restaurants. And the drama seems much more harrowing too! This show has made me thankful we have a rating system in LA!

I agree House of Pies--definitely needs a makeover. Killer location, great idea but has gone way downhill since it's heyday in the late 80s. Nothing is fresh there...all canned and/or frozen ingredients. And a C rating...say no more. Puran's--I thought it was a vegetarian place--definitely needs help, another excellent location with no reason to go there.

Taix on sunset in echo park... good location, lots of space, but blech to the food.

Panang in Eagle Rock. is it sushi? Thai? does the A/C ever work? why is there a gift shop?

Virtually every restaurant in the Los Feliz/Silver Lake/Echo Park area could offer justification in some way.
Many of the above mentions are spot on, yet those not mentioned far outnumber them - as an example, every Mexican restaurant without exception.

When the Wow Gold wolf finally found the Buy Wow Goldhole in the chimney he crawled wow gold cheap down and KERSPLASH right into that kettle of water and that was cheapest wow gold the end of his troubles with the big bad wolf.

The next day the cheap wow gold cheapest wow gold little pig invited his mother over . She said "You see it is just as I told you. The way to gdpchinaget along in the world is to do world of warcraft gold things as well as you can." Fortunately for that little pig, he meinwowgold learned that lesson. And he just lived happily ever after!

Do you think that theguaid wars gold in the game is important, many players want to in the game has moregw gold, so in the game they effort to do the tasks, sometimes they spend a little money tobuy guild war gold, so I think if now I had enough cheap guild wars gold them sold to them, I can earn a lot miney.