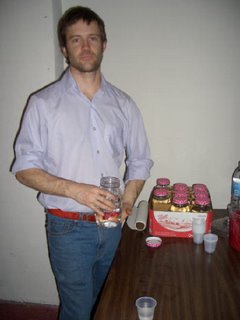 (Left, some fine Echo Park hooch)
Eating L.A., which is sometimes Drinking L.A. too, couldn't miss the demonstration of making corn whiskey in an Echo Park gallery. So Saturday night we checked out the Machine Projects talk where Alison explained why she wanted to build a still, and how to make corn whiskey. It seems considerably more complicated than brewing beer, which I gave up long ago along with making pasta and other labor-intensive pursuits. Samples were liberally distributed, and although I don't usually drink straight whiskey, I found it surprisingly tasty. It was much smoother than I would expect homebrewed hooch to be, providing a pleasantly warm feeling without any alcohol burn. I found about about Machine Projects through BoingBoing, which is fast becoming one of my favorite blogs. I used to think it was too hard to wade through all the geek-speak, but now I find it easy enough to quickly scan it for things non-computer programmers would be interested in, and there's always some good stuff on there.
at 11:48 AM