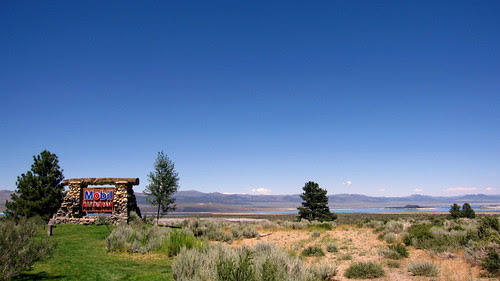 A summer roadtrip on Highway 395, from Lone Pine to Lee Vining by way of Mammoth, isn't necessarily a gastro-tourism experience. With a little effort, the California tourism folks could rebrand this lonely highway the Pie Highway, the Jerky Road or the Trout Route and cultivate a whole new group of visitors. But if you have an appreciation for solid American specialties, there are treasures to be found along Highway 395. Just a few hours drive from L.A., the scenery along the way is spectacular, from the otherworldly rock outcroppings of Lone Pine's Alabama Hills to the Alpine feel of the Little Lakes trail or the desolate beauty of the tufa towers of Mono Lake. For our first visit to the area, we stayed in a cozy house from Airbnb -- I knew nothing about the location south of Mammoth other than that it seemed close to Pie in the Sky, which came highly recommended. Here's a few highlights along the way: 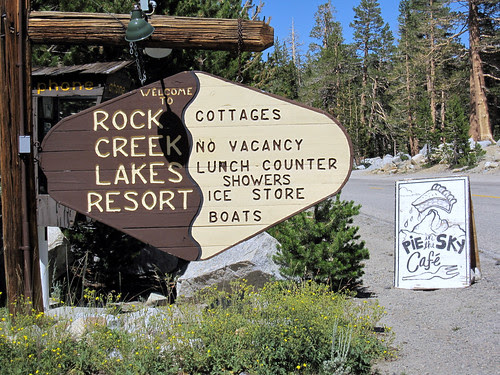 Pie in the Sky is located at 10,000 ft. high Rock Creek Lake, nine miles up the road from Highway 395. On any given day, freshly-baked pies will include boysenberry, rhubarb, apple, banana cream, peach and several more. At some $6 a slice, the pie in the sky is a bit high, but it's hard to beat the experience of ending a long hike along a gushing mountain creek with a slice of fresh fruit pie with a crumbly, slightly sugary crust. 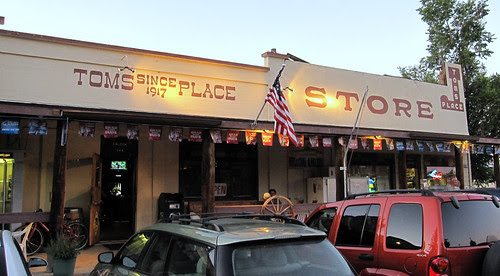 We stayed walking distance from Tom's Place, an old-school roadhouse that's been in operation since 1917. The food's not fancy, but the enormous platters of chicken-fried steak, pot roast, burgers and tuna melts go down just fine after a day in the mountain air. Several sturdy beers from Mammoth Brewing and Indian Wells Brewing are available, so skip Tom's Orange Crush-flavored house brew. 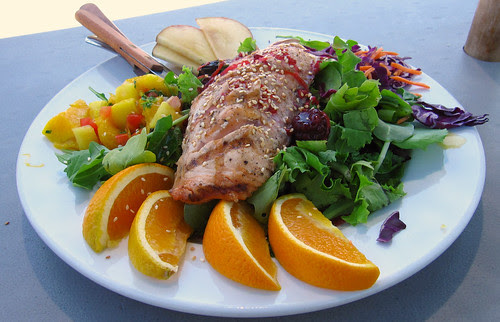 Everyone recommends the Whoa Nellie Deli at the Tioga Mobil Station near Lee Vining. It's definitely some of the better grub you'll ever get in a gas station, but it's fairly pricey and jam-packed with French tourists. My salmon salad was bright and healthy, but for the first of several times, I wished for some of the trout that pack the local lakes. I don't quite understand why there's millions of fish in the lakes, but all the restaurants serve frozen fish and generic hamburgers. 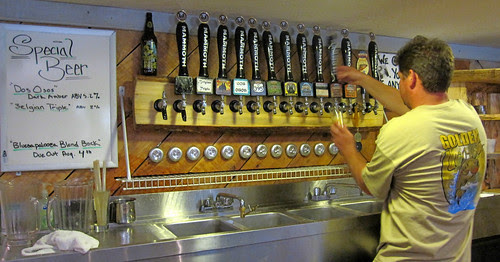 Mammoth Brewing Co. offers free tastings of all 11 of their very good beers, as well as growlers and large bottles to take home. Highway 395 is an aromatically hoppy IPA, while Real McCoy amber is also a fine choice. Might as well try them all, the better to find a favorite. 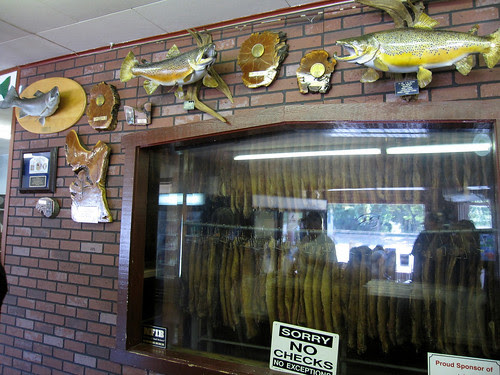 Eric Schat's Bakery in Bishop is another of those must-stop places with tons of tourists and annoying signs like "no pictures inside the bakery." The raisin-sunflower energy bread, signature Sheepherder's bread and chile-cheese bagels are all highly consumable, but don't make that your only stop in Bishop. Mahogany Smoked Meats has been smoking since 1922, and they seem to have it all figured out. Sandwiches at the lunch counter have names like Hog Heaven and are made with their deeply smoky bacon and other meats, while the butcher counter sells housemade jerky, sausages, smoked turkey, pork chops, elk salami and of course, bacon.
With snow, high winds and 100 degree summer temperatures in the lower regions, there's not many edibles growing along Highway 395. Fortunately, the area still holds plenty of treats for the determined eater. Here's more photos of the trip on Flickr.
at 10:48 PM

Hope you enjoyed the non-eating parts of your trip. I'll be sure to try Pie in the Sky and Tom's Place on my next trip north.

schat's in Mammoth is so much better than the one in bishop!

You've found all the gems there are to find... Except maybe the potato salad at a simple diner in Lone Pine that Can be quite excellent. Nice piece!

Oh - and the Schat's are relatives, but each is a bit different. You know a bakery is good whe therre OS a line out the door - ALL DAY! I prefer the Mammoth one because I don't want to hang out in Bishop & wait in line!

Great post! I'm a Mammoth local and you definitely hit up all the great spots. One spot you need to check out is the Mono Cone in Lee Vining. It's just down the road from the Whoa Nellie Deli. It's a good spot to get a hamburger and soft serve after back packing in the wilderness. Oh and I think the Schat's in Bishop is WAAAAY better that the one in Mammoth. The bread is better quality at Bishop one but the sandwiches are just as good at either location. If you are ever in Mammoth Lakes again, try Skadi's for Norwegian-style alpine dining and my favorite place in town is Hot Chicks Rotisserie. It is locally owned by a family and I am addicted to their mac'n cheese.

Here is my blog on the Whoa Nellie Deli http://topburntchef.blogspot.com/2009/09/mobil-mart-restaurant.html