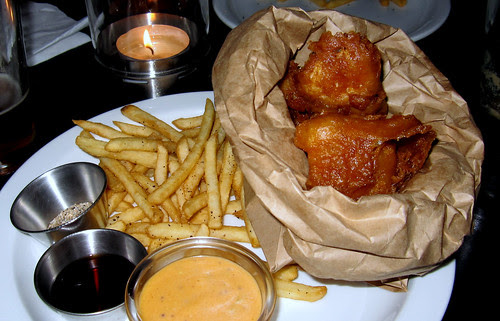 catfish 'n chips in a bag, with shaking and dipping sauces

I've been to Beer Belly twice in two weeks now and I'm already plotting my route on the subway so I won't have to drive home next time. That's the time when I'm going to need to settle in with a beer tasting flight and whatever new items pop onto the ever-changing menu. I might even have to take a friend who has an iPhone, so I can get in on the jukebox action. Beer Belly is a little beer bar hidden in the back of a Koreatown parking lot, that rocks a rotating selection of craft beers, a tightly-edited menu full of crunchy, crispy, salty dishes that pair perfectly with beer and a friendly crew headed by owners Jimmy and Yume Han and chef Wesley Lieberher.
Lieberher can fry like nobody's business, whether it's fried okra, fried boneless chicken, or the catfish and chips, with a crust that shatters like a ninja kicking in a candy glass window. The fish's batter is made with Craftsman Poppyfields Pale Ale; grilled broccoli and cauliflower comes with cheese "whiz" on the side, the cheese sauce livened up with a piquant shot of Victory Prima Pils.

One night, pork belly sliders cozy up to tart pink cabbage; another time, there's smoked whitefish mousse, or mussels steamed in Deschutes Twilight summer ale, or artichoke chips. The duck fat fries are a constant, if heart-stopping companion to 12 mostly Californian brews like Black Market Anglo-American Brown from Temecula or Port Brewing Mongo IPA.
Matt liked the music ("Anyone that plays Nada Surf is ok by me," he says.) My not quite legal son liked the root beer float, and vowed to return for the deep-fried Oreos. And I liked the holy trinity of IPA, catfish nuggets shaken up with seasoning in a paper bag, and fries dipped in gumbo tartar sauce.
There's free parking in the lot next door, you'll likely run into someone you know, and it's near the Metro red line station. Plus, Beer Belly opens at 3 on Sundays, for an even more mellow scene (the room gets a little loud later at night). But wait, there's no patio, you say. Han says that could soon be a reality. Or perhaps you say, if the chef is from Philadelphia, why don't they serve gourmet cheese steaks? Well, that too, will soon appear on the menu. Just as long as they don't take off the catfish.
Beer Belly
532 S. Western Ave.
213.387.2337
(closed Tuesdays)
at 9:54 PM

this looks very greasy! I hope that tastes good! I would like to try the

Gentle correction: Beer Belly is by the Wilshire/Western station, which is the Purple line.