A dessert tour of Latin America? I was a little worried. Despite the fact that I know Bill "StreetgourmetLA" Esparza would never lead me astray (unless it involves tamarind margaritas), I had visions of tasteless starchy conchas from the bulk bin at the local Mexican market. But I showed up anyway at 9:30 on Saturday to see what he had in mind. In fact, we didn't hit any Mexican places on our tour of desserts of Latin America.
First up was Panaderia El Carriel, the most off-the-beaten path of the places we tried. The Huntington Park Columbian bakery is a tiny bare-bones place, but in addition to an array of only-in-Columbia pastries, it serves full 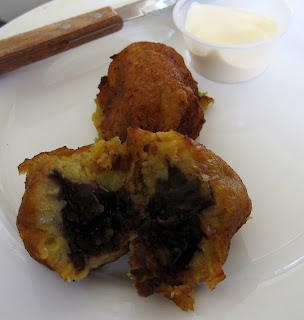 Columbian breakfasts and lunches. We tried flaky chicharronitos filled with dulce de leche or cajeta milk caramel, called arequipe in Columbia; warm round bunuelos, tasting like fresh cake donut balls; pan de bono, small bagel-like savory cheese breads and arepa de choclo, a sweet corn-inflected disc sprinkled with cheese.
Next it was back to central L.A. to Amalia's on Virgil for Guatamalan sweets, where plantains are king. On the dessert menu were plantains stuffed with sweet black beans and crema (right); atol -- a hot, plantain-based drink and an unusual dessert mole, in which plantains swum in a cinnamon and chocolate-scented sweet mole sauce.
Just down the street was Rincon Chileno, which I have been driving past for about 20 years never realizing I was missing out on Panqueques Celestino. These heavenly pancakes are thicker than crepes, heavily browned on the outside, sprinkled with powdered sugar and filled with rich dulce de leche, called manjar in Chile.
Running out of time, we had to regrettably skip Wood Spoon's Brazilian passion fruit mousse and press on to El Colmao, another longtime staple. Here we tried flan with guava shells, which were very sweet but paired well with a competent flan, and a less-common Cuban dessert of shaved sweetened coconut paired with Philadelphia cream cheese. Again, very sweet but I liked the unusual combo of creamy cheese and sweet coconut. While flavors like corn, plantain, dulce de leche and guava are common throughout Latin America, each country has a different and worthwhile take on how to present desserts. Next time you eat at a Latin American restaurant, save room for dessert!

That's not really what I would have expected either. Then again, that Bill Esparza is always full of surprises. Looks like a lot of fun. Count me in for an order of fried plantains filled with sweet black beans.

I love the idea of a Latin American dessert tour! Quite inspired.

Looks like I missed out on some damn fine sweets! Bill's the man!

these all look so delicious!

I had fried bananas with mango ice cream once and i've been craving them ever since....latin deserts are sooooo good. I'm curious about screamincoupons. anyone actually tried it yet?

Hate to nit-pick, but the correct spelling is "Colombia" not "Columbia" - drives my Colombian friends nuts.

This looks great! Looks like I missed on some sweet treats!

Great report on some lesser known places for desserts. Thanks for the thoughts and info. :)