I first heard about Don Dae Gam from Josh at FoodGPS, who checked it out in its early days last fall. So when an assignment came up to choose a restaurant to try for the upcoming Mid-City Press newspaper, I remembered that Don Gae Gam was on my always-evolving "must-try" list. It's owned by the same people as Park's, which always comes up in discussions 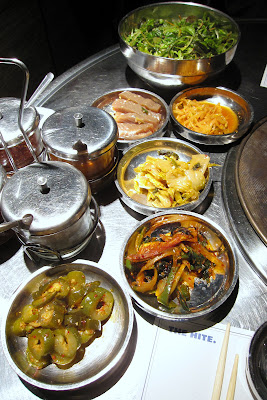 of the best Korean barbecue in L.A. But here the focus is on pork, though beef is available in some of the combo dinners. The mini-mall restaurant uses real charcoal, with a powerful ventilation system that mostly gets ride of the smoke from the grills. Korean restaurants often order combo dinners, which will serve two to four people, depending on how many side dishes you order.
We chose the $40 combo, which comes with three cuts of pork -- pork belly, pork neck and shortribs -- as well as several types of panchan, egg custard, a beer or soju, tofu soup and rice soup. We added a kimchi pancake since I've been on a big kimchi kick for the last year or so. I liked the thin pork belly, which was unseasoned and presented a blank canvas for the rice noodle wrappers, soybean sauce, sesame salt and chili sauces. Matt preferred the marinated shortribs, which the server cut up into manageable bits while they were grilling. Pork Korean barbecue seems to have less marinade in general, so it's more about the flavor of the pork. I think I might prefer the sauciness of the beef when it hits the caramelization of the grill, but some of the combos come with beef also, the better to compare grilled meats. Adventurous eaters can also try pork diaphragm or pork intestine. The panchan wasn't quite as wide of a selection as at some places, though it seems to change with each meal. I'd go back for the kimchi pancake alone, which managed to combine crispy, soft, tangy and just a bit greasy in the most delightful way. If you've had Korean barbecue with beef plenty of times already, this is the perfect place to branch out, and even try other dishes like the spicy pork and baby squid stew that sounds fiery and pretty amazing. 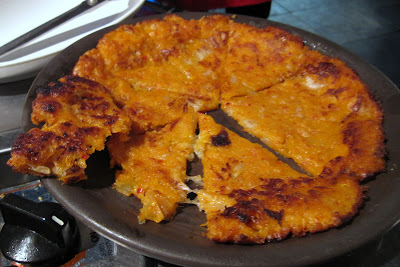 The restaurant has a couple of nice touches, showing that it's a contemporary style rather than old-school place: A small children's play area is available for tots who tire of unending courses of kimchi and pork, and at the end of the meal the host takes customers' photos and asks you to draw a pig or write a note on a card to hang on the wall.
Don Dae Gam
1145 S Western Ave.
(323) 373-0700

I agree with everything you said. But the spicy baby octopus and pork belly stew and rice dish, whatever it is called, is so delicious. I hope you tried it.

Looks incredible - I love Korean BBQ. I've always been more of a beef fan than a pork fan, though, so will be interesting to try all the types of pork they have.

Glad to hear you enjoyed your initial trip to Don Dae Gam. That continues to be one of my favorite Korean restaurants. Next time, try the diaphragm and neck meat. The sizzling rice cakes with pork are also addictive.

Nice write up and review.

I'll definitely have to give this place a try.

OMG that kimchee pancake looks delicious. Thanks for the psot, i def wanna try the diaphragm and intestines!

Yea, Steve I agree. I tried them and loved them :)

I have a Bourdain-esque love for the pig, so hearing about a place like this gets me hungry. I've never tasted any kind of Korean food that I didn't like, so I'm game to try this place!

Chung Dam for cow, DDG for pig. Rest of Ktown's BBQ is all moot beyond that.

It's just unfortunate DDG can be prohibitively expensive for only 2 diners.