NomNom Truck: One of our favorite meals-on-wheels so far 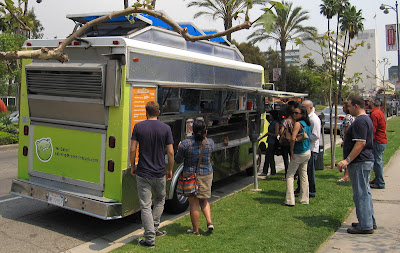 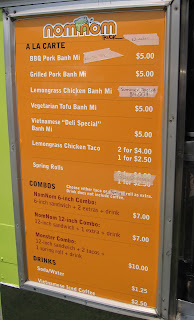 As soon as I heard about the Nom Nom Truck, I was excited, because delectable Vietnamese banh mi sandwiches are really only available east of Downtown or in the faraway Westminster area. I know, there's a few places around Silver Lake that have them -- Viet Noodle Bar, Gingergrass -- but they're pricey and it seems a bit precious to order them in a real restaurant. If an outlet of Lee's or another chain were to open a shop in Santa Monica, Westwood or Hollywood, people would go completely nuts, even if they charged double what they charge elsewhere.
Anyway, I was swamped at work when the Nom Nom truck arrived on Wilshire Blvd., but two helpful co-workers were game to check it out and pick one up for me. Justin, Janine and I all got the bbq pork banh mi ($5), so I can't report on the other flavors (lemongrass chicken, deli special, grilled pork, tofu). "The bread was much better than I expected," reported Janine, although she didn't like her lemongrass chicken taco as much.
Indeed the bread was soft and crunchy, the pork was good-enough quality and there were the requisite veggies and cilantro inside. Some traditional ingredient was missing -- hoisin or Maggi sauce? and there was more mayo than usual, but it this sandwich was head and shoulders above what is normally available on Wilshire Blvd. 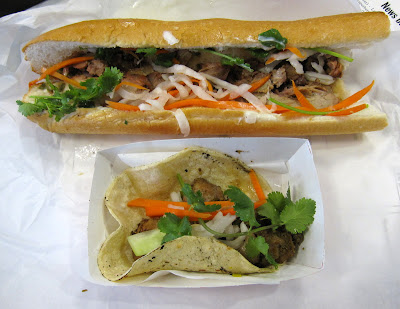 This truck should be a lesson to other trucks: Keep the menu simple, make it possible to have lunch for $5, and make sure it actually tastes good.
Tip: Make sure to ask for sliced jalapenos if you like it spicy.

Was the sandwich missing pate? Hoisin and Magi are rarely found on banh mi. I'm so glad to read a positive review of Nom Nom. I wonder when our paths will cross...

If only the had a Seitan Banh Mi, I may be able to fill a bit of the hole left in my heart since KP's closed.

Looks good for $5. I think some of these trucks need a reality check when it comes to pricing.

$5 is really pricey for a good Vietnamese sandwich. 3 sandwiches for $5 in Westminster!

@ Hueezer: at $5 they pretty much are priced out of little Saigon and SVG area--although, it's certainly on par with the 5 dollar foot long "deals" anywhere else. The key here is that they are targeting the westside where theres not much in terms of Vietnamese.

Agree w/ Gastronomer. Unlikely that they used hoisin, but If they did, they clearly have not done their homework.

Hueezer, I know they're cheaper in Vietnamese areas, but a lunch trip from Wilshire Blvd. to Westminster is not really feasible!
OK, maybe it wasn't hoisin they were missing. Maybe just a squirt of soy sauce, or maybe I'm used to a different pork marinade.

I would also suggest Via in Chinatown

Actually, I thought the tacos were much better than the banh mi (particularly the grilled pork, which had a lot more flavor than the BBQ pork), but that might've been my choice of meat. That said, their Monster Combo is a pretty good deal.