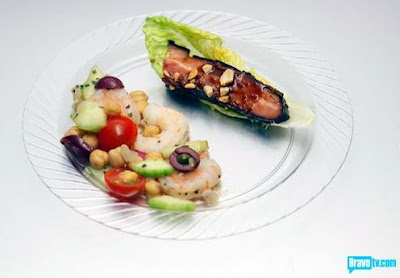 The Quickfire challenge: Create an "out of the world dish" using a variety of different potatoes.
Stupidest idea: Ash wanted to make sweet potato ice cream. It didn't come out, so he renamed it a custard, but amazingly the judges thought it was pretty good.
Dishes I really want to eat: Robin's potatoes, pancetta, fried egg and frisee -- I'd like to try that dish and Eli's yam puree with bourbon maple syrup, even though Peel said it was too sweet.
Quickfire winner: Jennifer's mussels had duck fat and butter and creme fraiche -- think there's enough fat in those mussels? So of course they won, probably based on fat content alone. Commenters feel more attention should be paid to Jennifer.
Random: Michael Isabella has a little too much machismo posturing for his own good.
Elimination round: The chefs have to cook for hundreds of Air Force Thunderbirds in an airplane hangar. They decide to team up and work together based on common cities or similar levels of chubbiness. But there's nothing to work with but canned food -- even Spam -- and huge industrial cookware.
I wouldn't touch: Mike's Greek salad and the pasta salad both looked insipid, like they would taste of refrigerator as soon as they were made.
Crowd-pleaser: The airmen said their favorite dish was elfish Eli and elfish Kevin's Georgia-style braised pork -- Kevin's family does competition barbecue, so he's got the chops.
The winner: Michael Voltaggio, whose sister was in the Air Force, showed that it's hard to go wrong with "super mega-delicious" soy and mustard braised pork belly made from slab bacon. That's why it's one of the most popular dishes in most restaurants at the moment, because it's rich, decadent and delicious. Michael's brother Bryan won last week, so now the brothers are neck-and-neck. 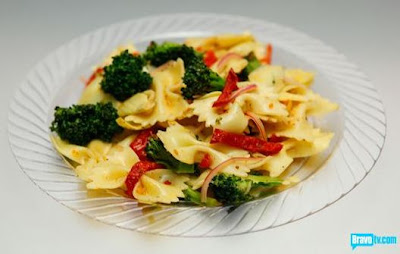 The loser: Preeti and Laurine pretty much sealed their fate the moment they decided to make a pasta salad using bowtie pasta and sundried tomatoes. That happens to be the exact recipe I contributed to the 1994 L.A. Family School nursery school cookbook, so can you say TIRED? Neither would cop to actually coming up with the idea, but because Preeti seemed less remorseful, she had to go. Preeti, who claimed she got eliminated because "the competition is much stiffer this season," is executive chef for Google, which sounds pretty cool, but maybe overworked computer geeks are more forgiving than guest judge Mark Peel of Campanile.
In conclusion: I feel like it's all about the guys this season, but maybe next week my girlcrush Ashley will get some facetime.
at 7:28 PM

all about the guys AND JENNIFER!

Get rid of everyone and just have the brothers do a FACE OFF for ten episodes.

Jennifer is definitely in my top 3, and the situation between the two brothers is going to get heated before long. I can just feel it.

Who goes on Top Chef and makes pasta salad? They should have tossed them both off the show. This isn't 30-minute meals, or whatever that show is called.

So far the talent this season seems higher than the past seasons. I'm dominating my Top Chef Fantasy this year!

Why can't you put this stuff behind a spoiler cut so that those of us with DVRs who didn't watch it yet don't have to be spoiled?

Do I really have to stop reading this blog until I'm caught up on my DVR?

the dude who wears the Affliction t-shirts needs to go, I also agree, MORE JENNIFER, love her attitude

Why don't you people just read it after you watch it? Why read someones thoughts about a TV show that clearly lists Top Chef #3 before you watched the show and complain about spoilers? Don't blame them...it's on at a specific time every day. If you don't/cant watch it then don't expect other people to keep their mouths shut to wait for you.

Hey, I love your blog, but isn't it supposed to be about LA? The Top Chef recaps feel like an obvious SEO land-grab to me.

Thanks for your support, anonymous! A lot of people in L.A. watch Top Chef, and I was spurred to do it this season after meeting Michael Voltaggio at the Langham. I'll try to bring a local angle to it when possible, just trying to have some fun.