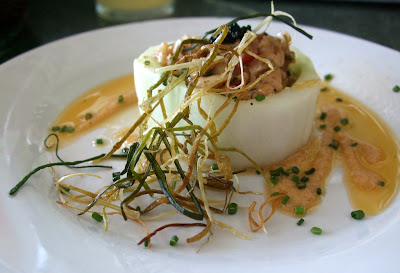 Before this last trip to Tijuana, I had vaguely heard of alta cocina (like haute cuisine, only in Spanish), but I confess I imagined it as some sort of fussy French-influenced hybrid that probably unnecessarily tarted up Mexican food. It only took one afternoon to show me how incredibly ignorant I was of what was going on south of the border. In addition to the street food from the previous post, our group of bloggers and chefs visited a range of restaurants which I'll describe one by one so that Tijuana visitors can pick the style that appeals to them. We were invited by the Tijuana Convention and Visitor's Bureau, but I would have no hesitation recommending these restaurants on my own dime as well.
Each restaurant's address and phone is available on the linked website. 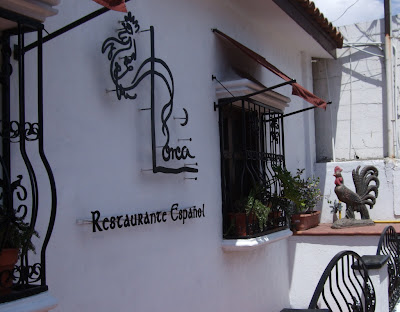 Spanish: We started the upscale portion of our afternoon at the Spanish restaurant Lorca, kicking things off with a whole suckling pig, known as lechon. There was also paella and Spanish potatoes with olive oil, but we couldn't stop gobbling the crispy skin and tender meat. Some of the chefs couldn't resist cracking open the head to get at the cheeks and brain, but I passed on that experience. 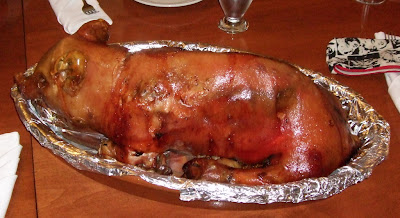 Argentinian: Cheripan is a sleek, modern Argentinian restaurant in the "restaurant zone" where many of the nicer places are clustered. Their steak brochettes are full of the beefy flavor that is hard to find in L.A., even if the tamarindo martinis are definitely on the sweeter side. 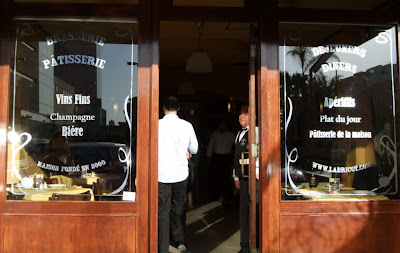 French: L'Abricot is a charming French cafe with a patio owned by a winemaking family, with a patisserie case and a full menu with bistro fare like onion soup, salade frisee and creme brulee that might be welcome after the hundreth taco. Also probably a good place to get caffeinated. 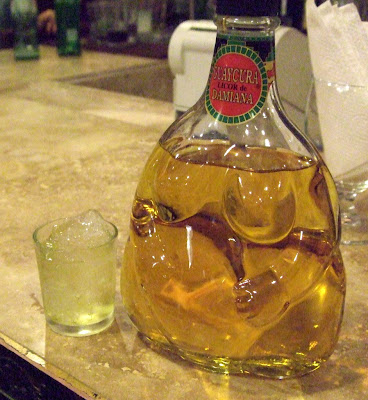 Alta cocina Mexican: Cien Anos puts an emphasis on seafood and ceviches as well as imaginative cooked dishes. Here we had our first taste of local chocolata clams in a coctel, luscious salmon ceviche, marlin salpicon and a spicy shrimp dish. We also sampled damiana liquor, an herbal drink with a sexy bottle and a reputation as an aphrodisiac. Alta cocina/Baja Med: The rather formal Villa Saverios, led by chef Javier Placencias, is certainly near the top of Baja restaurants, combining Mexican and Mediterranean influences with local ingredients. The octopus ceviche shown above is formed into a log and sliced to create the mosiac pattern. Also wonderful were the unusual chorizo/vermicelli tacos from an old family recipe, deeply flavored shortribs with fig mole and for dessert, simple but brilliant blackberry tamales. Their tamarindo margarita was my favorite, made complex and spicy with damiana liqueur, with a whole tamarind pod as a stirrer. 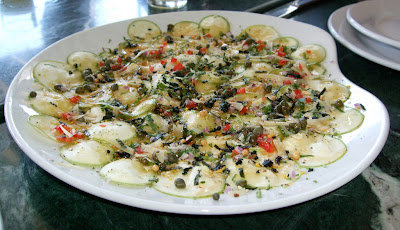 Baja Med: La Querencia's owner Miguel Angel Guerrero was the originator of Baja Med cuisine, a lighter, modern style that uses local ingredients with Mediterranean influence. La Querencia is casually hip, with a cool patio and trophy animals the chef has bagged mounted on the inside walls. La Querencia is probably the closest Tijuana comes to a trendy L.A. place like Animal or Gjelina. Zucchini carpaccio (above) with chile oil was a lovely way to show off summer vegetables, while beef tongue carpaccio was a revelation, with several layers of pleasantly funky, spicy, and herbal flavors all competing in the mouth. Some of the dishes are extremely reasonable, like an oyster burrito for around $2.50 and tacos for even less, but it's worth trying the full range of the imaginative menu, which features local specialties like abalone chorizo, shark and manta ray. If you're only going to try one representative of Baja's new cuisine, make it this place. I guess I'll never again expect that Baja's residents exist solely on fish tacos and carne asada tacos.

Here's more on these restaurants from Squid Ink's Noah.
Here's Barbara Hansen's Great Tastes of Tijuana report on Table Conversation.
at 8:38 AM

Your post makes me want to hop in the car and drive down to TJ right now! I am so curious about the chorizo/vermicelli tacos!pu

Octopus ceviche looks yum. Did you get the recipe for your favorite tamarindo margarita? Do any L.A. restaurants serve them? Sounds like a nice combo: ceviche + tamarind margarita.

This was a great review of some amazing and unique restaurants in Tijuana. I am a personal favorite of Bajamed.

Don't get me wrong though, the al pastor tacos on street stands are hard to beat.