6 Reasons to Eat and Drink in San Diego Right Now


"What food is San Diego known for?" asked Matt as we arrived at our AirBnB accomodation in the Hillcrest neighborhood of San Diego. "Besides beer, that is," he qualified. I was kind of stumped. There's all kinds of amazing taco and seafood artistry going on just south  of San Diego in Tijuana and Ensenada, but we were just in San Diego for a chill weekend and didn't want to bother with the border formalities just to have lunch in Tijuana.
"Um, fish tacos?" I ventured, not really knowing if there actually were any renowned fish taco places in the city. After perusing Chowhound and various blogs, I and came up with short list of places to try, though the general opinion seemed to be that Mexican food isn't as impressive there as one might expect. Don't let the haters dissuade you: In addition to being probably one of the best beer towns anywhere, San Diego has lots of fun places to eat as well as a flourishing cocktail scene. Here are a few:
1) Carnitas Snack Shack. There's nothing quite like it in L.A., which is one excellent reason to check out the little building that really does look like a small snack bar from the front (with a long line down the sidewalk at peak hours). The other, of course, is the food: monstrous, meaty carnitas tacos made from sustainably-raised pork, an insane smoked turkey/blue cheese/apple sandwich made with local poultry, Niman Ranch burgers and more. In back, there's a spacious patio with vegetables and herbs growing and a separate beer bar that's open at night. It's the perfect spot for a sunny lunch in a city that's been proven to have the country's most pleasant weather. It's not taco truck-cheap, but then, why would it be for this quality of ingredients? Also, if you can actually consume two of those tacos, you'll likely not eat again for around 24 hours.

2) Soda and Swine/Polite Provisions: When dinner time rolled around, we looked at the fun menu at the small and lively Soda and Swine, which specializes in beef, pork, chicken, chorizo or vegetarian meatballs and pie, but we were still too stuffed for meatballs. Instead we grabbed a spot next door at Polite Provisions, an old-timey pharmacy-themed cocktail spot that's about as hipster as San Diego gets. That means that the mixologists wear bowler hats but the friendly drinkers are still in t-shirts and flip flops, happily tucking into meatballs delivered from Soda & Swine along with communal punchbowls and cocktails on tap. Don't miss the Misty Mountain Buck, with homemade ginger beer, rye and lime juice.
3) 24-hour taco shops: By midnight or so, we were finally hungry again, and found out that San Diego has a wealth of drive-through 24-hour taco shops. We stopped for fish tacos at Los Panchos, which is probably not the most amazing Mexican food ever, but it's cheap and probably way better than what you can get at midnight in most of the country.
4) Mariscos El Pescador: The real Mexican seafood action was to take place the next day. After wandering around Coronado Island, we headed south on the 5 for a few miles to Chula Vista. I'm not sure if dining in a Toys 'r Us parking lot is high on every tourist's list, but when I hear fresh octopus tacos, I'm there, even if a curb is the only seating at Mariscos El Pescador. Actually we snared two of the few plastic chairs, the better to enjoy some terrific spicy shrimp and buttery octopus tacos and a citrus-y fresh scallop tostada. The menu is above, just so you can see the wide variety of super-fresh seafood available at this popular truck just a few minutes from the Mexican border. 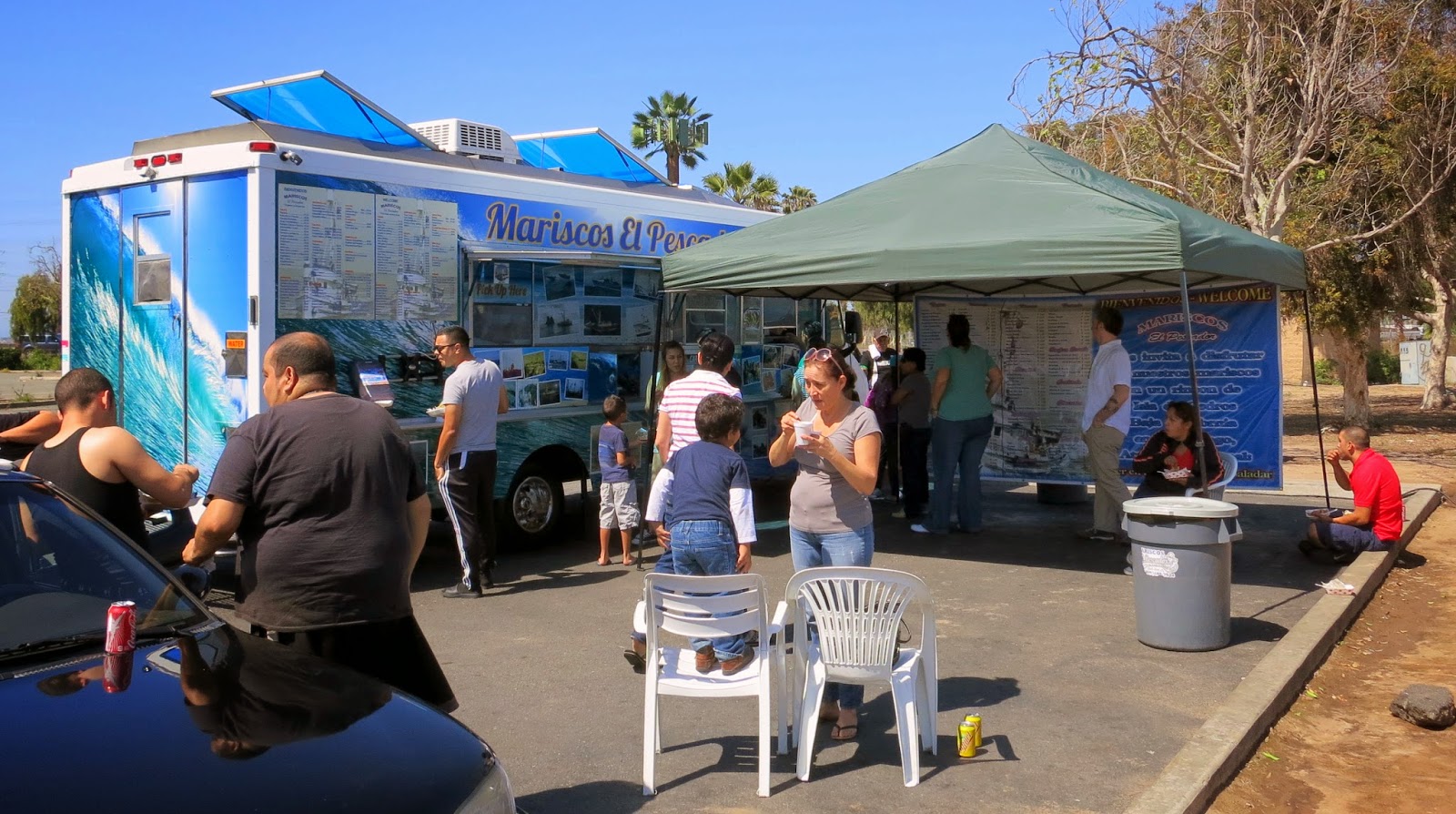 5) Neveria Tocumbo: A quick Yelp search led to Chula Vista's Neveria Tocumbo, which hit the spot with mango-topped mangoneada sorbet sundaes and ice cream in flavors including queso and mamey; other concoctions included numerous varieties of paletas and Tostilocos.
Of course, no trip to San Diego would be complete without visiting at least one brewery. Since we had already tried quite a few local beers at Toronado, Local Habit and the hunting lodge-themed cocktail lounge Sycamore Den, we only made it to one actual brewery on this trip
6) Modern Times: One of San Diego's newest breweries is a cool and cavernous space in the warehouse district near the Sports Arena. One huge wall is covered in pages from vintage comicbooks, while another features a mural made from thousands of colored Post-it notes. We had a tasting flight of all four beers being poured, and loved both the Black House coffee stout and the Fortunate Islands hoppy wheat.
Next time, we'll have those meatballs for sure with a house made almond soda at Soda & Swine, try homestyle Mexican at Super Cocina and finally get to Alesmith Brewing, among others. What are your San Diego favorites?

Gotta say you did very well. No false steps. Next time I would put Top Chef Richard Blais's brand new place, Juniper & Ivy on your list.

You could try Blue Ribbon Rustic Kitchen in Hillcrest for Italian-Californian (and a great late night HH with good food and cocktails), Urban Solace or Smoking Goat in North Park for San Diego takes on New American cuisine, Starlite for cocktails and good food and Lion's Share for great cocktails and food with focus on unusual meats (antilope sliders anybody)
How was Sycamore Den ?

Unknown said...
This comment has been removed by a blog administrator.
10:33 PM

Hi there, I saw your blog as a sidebar link. Glad to see that you went to same good spots in San Diego (my hometown). El Pescador is one of my favorite taco trucks (I also recommend Tacos el Prieto also in CV, and Mariscos Isaac in Imperial Beach). Neveria Tocumbo has great flavors that are hard to find elsewhere. I highly recommend Romesco's in Bonita for "Mexiterranean/Maja Med" cuisine.

Fyi..Blue Ribbon in Hillcrest is now closed. There is a location in Encinitas. If you ever hit up North Park, there are so many great places to check out. There is a Modern Times Flavordome lcoation at the end of 30th St and Upas (near Tacos Perla and across from Smoking Goat).