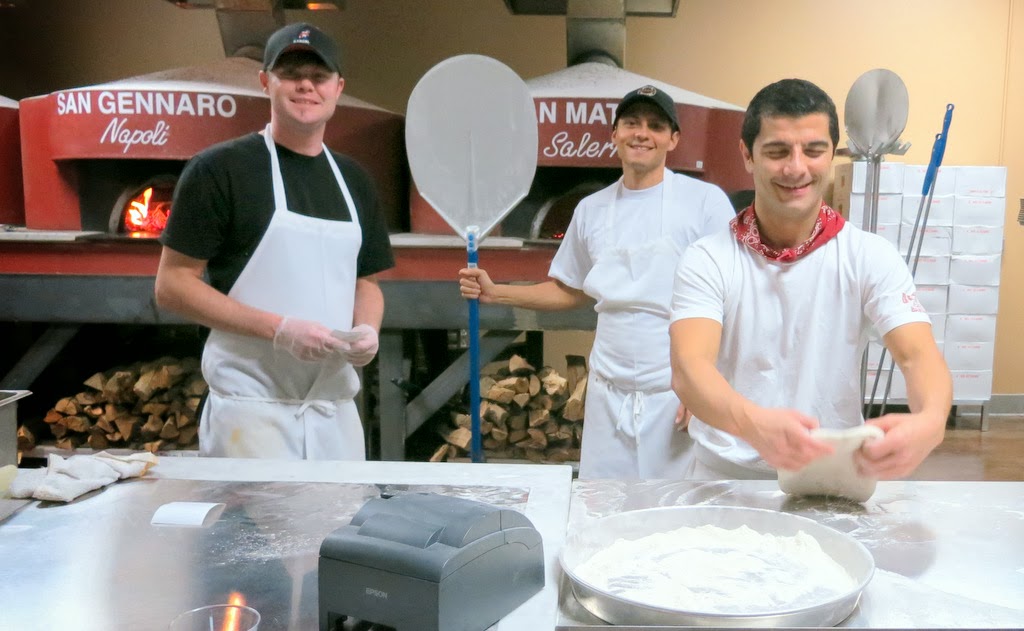 East Hollywood is already divided into Little Armenia and Thai Town, but now it may be time to carve out a Little Italy neighborhood on desolate eastern Santa Monica Blvd. near Normandie. The brand-new DeSano Pizza Bakery is so Italian, the Nashville-based pizzeria has a .it web domain, normally reserved for websites based in Italy. It's so Italian that not only are tomatoes, flour and oregano are brought in from the boot, but large bags of Italian sea salt line the hallway of the giant pizza bakery.
It's so Italian that one of the owners, Marino Monferrato, was previously general manager at Cecconi's in West Hollywood, while the main pizza-maker is named Massimiliano Di Lascio and some of the pizza-makers are conversing in Italian while they toss around the dough. It's so Italian that the TV plays soccer instead of football. 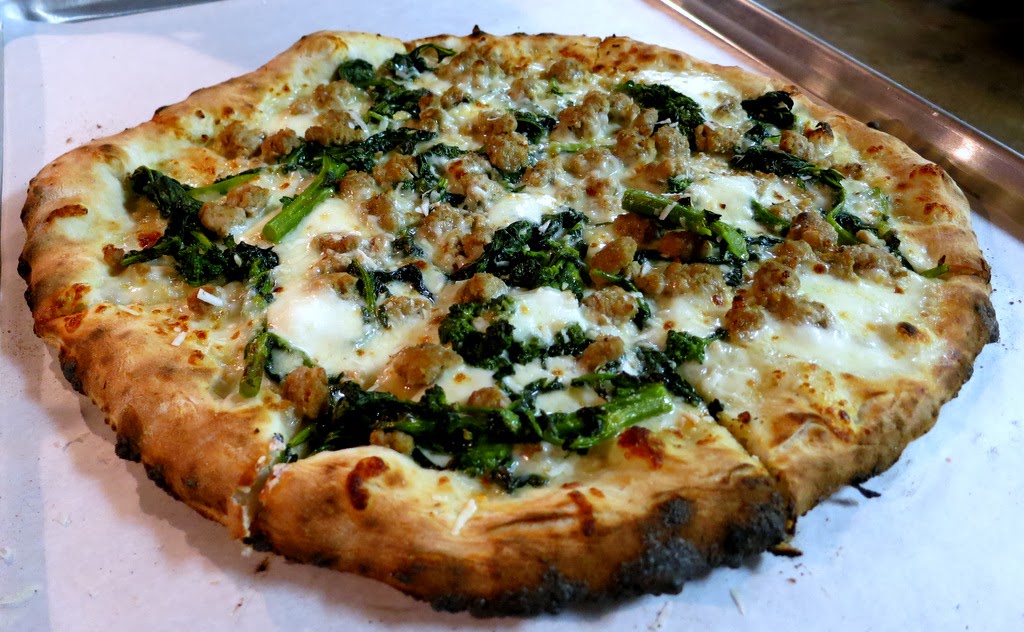 Not for locals only: In these days of all-local everything, bringing in nearly everything from another continent sounds almost counter-intuitive, but the proof is in the pie, which is very good indeed.
More tender and giving than the crust at Mother Dough, yet more substantial than Pasadena's Settebello, it's a true Neapolitan pizza with just the right heft. (Lago di Argento, take a note: this crust has just the right amount of salt.) 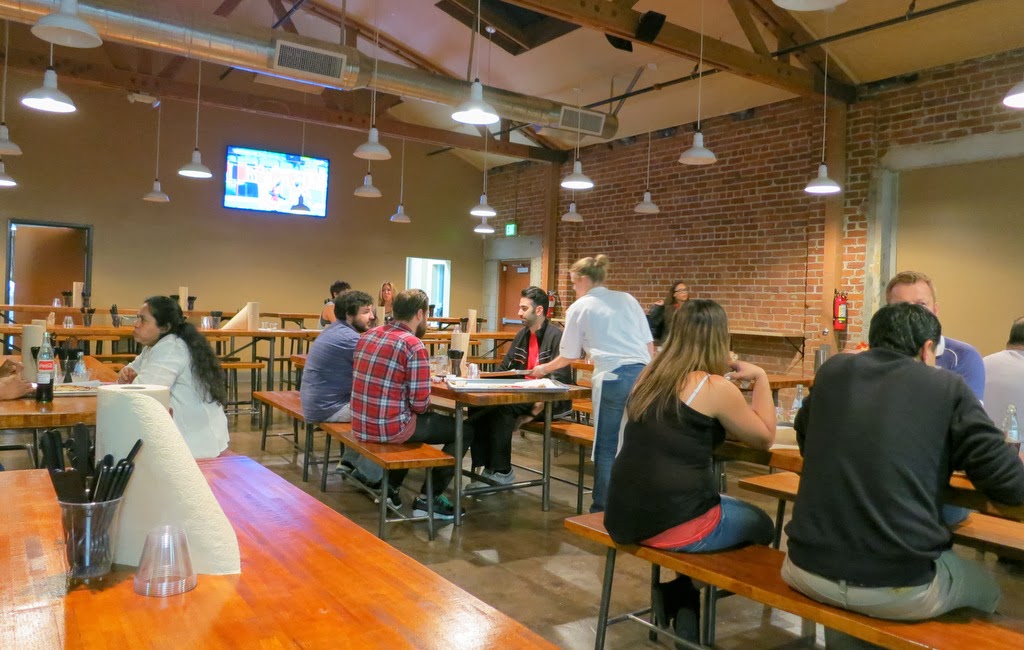 How-to: The staff is so friendly that they're already waving you in as you step one foot out the car door that you've parked in the spacious adjoining parking lot. You order at the counter in the front room of the former auto shop. Of course you can get it to go, but there's plenty of picnic-style seating in the large baking room. If you've ordered a spinach or caprese salad to start, it arrives right away, and the staff solicitously tears off pieces of paper towels from the roll on the table for napkins and offers cups for water from a fountain. (There are soft drinks and Pellegrino to drink; no wine or beer.) The pizzas cook quickly in four wood-burning ovens and are brought to your table in 10 or 15 minutes at most. 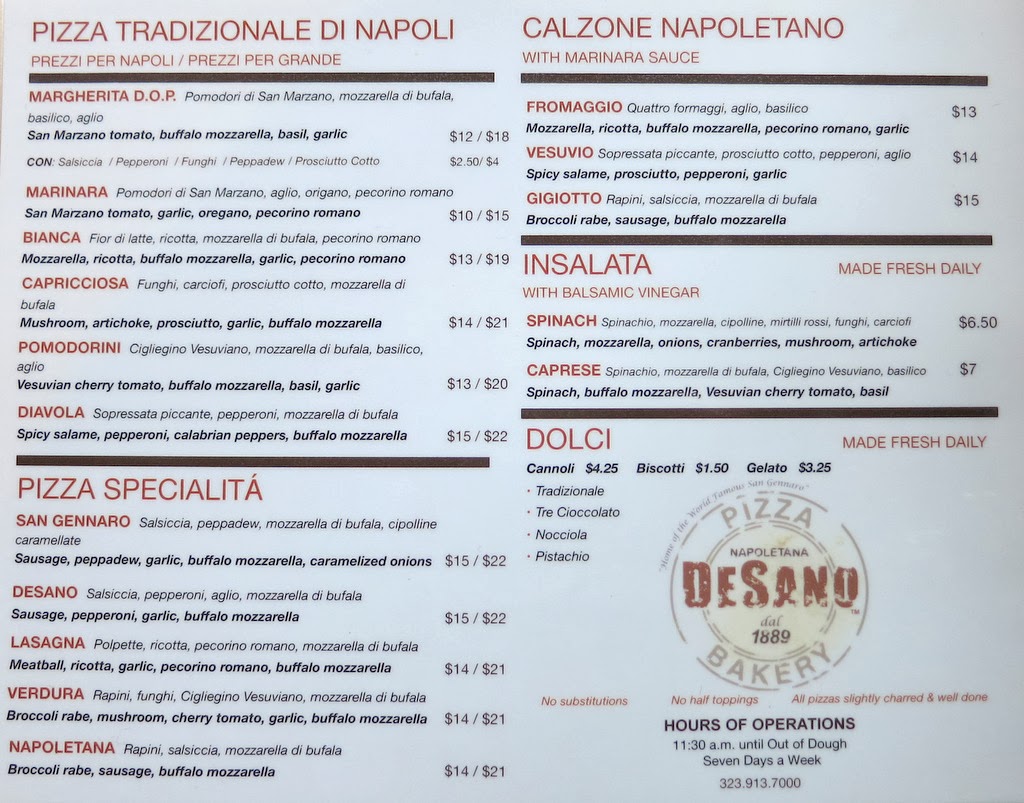 Pizzas are available in medium and large, and two fairly hungry people can easily polish off a large. The buffalo mozzarella cheese was milder and more chewy than I'm used to, but worked well with the broccoli rabe and sausage topping we chose. Next time, I would try a Margherita, which comes with sauce and can be topped with sausage, peppers, proscuitto or mushrooms. Most of the specialty pizzas don't have tomato sauce, so ask if it's important to you. There's also calzones and cannoli or gelato for dessert.
The verdict: DeSano Pizza instantly shoots near the top of the list of L.A.'s best pizzas, ranking right up there with Vito's and Mother Dough. (I'm not counting Mozza or Sotto because fancy restaurant pizzas are in kind of a different category.) And the best thing is that getting a solid 'za in L.A. is no longer a difficult quest, with so many good recent additions to a city that only 10 years ago didn't serve up many decent pies.

Anonymous said...
This comment has been removed by the author.
7:46 AM

Anonymous said...
This comment has been removed by the author.
7:47 AM

Thanks for this post! Hubby and I went on Sunday and it was delicious. Hubby is a bit of a NY Pizza purist and this dough was just as tender and chewy and sweet as you described, Napolitano style, like you'd get at any street corner pizza joint in NY or at our holy grail, Benny Tudino's in Hoboken, NJ.

They might struggle to keep some people coming back if they're too pure about their "tomato sauce only on certain pies". And they should be green and just put condiments on the tables in sugar shakers for people to help themselves instead of in those little plastic cups.

But otherwise....nice people, great food, nice family atmosphere (that's Italian!) lots of space to spread out. We didn't check if they have a BYOB license, but if they did it would be a great place to watch the World Cup from this summer.

Thank you so much for this post! I have been walking by this ever since they opened and wondering if it's any good! Now I know that it is, so huzzah!

(Also love that they don't put tomato sauce on everything, because I'm not a huge fan of it anyway and always feel like a goober for asking for it to be left off)