Atwater Crossing Reboots with BBQ as The Crossing...or ATX


ATX, formerly Atwater Crossing Kitchen, is almost the restaurant I used to dream of when my kids were small: a place with decent pizza where the kids could run around while the parents drank pitchers of reasonably-priced craft beers. It only took 15 or 20 years for the near-Eastside to catch up to that idea, but now that we've got The Crossing, the results are a bit uneven.
Early in the evening, it appears that plenty of parents and dog-owners have also been waiting for a place like this -- even though there's nothing specifically kid-friendly on the menu, the patio tables are spread-out enough that the tots aren't as likely to bother fellow diners. It can be a confusing place: the ownership seems to keep changing, so there's not really a website, and even if you live nearby, you'll probably want to consult the GPS the first time you go. But now, Texas smoked BBQ has been added to the earlier pizza-intensive menu.

We tried some of each, and the barbecue wasn't quite up to snuff yet, although the sauce was a tangy, zingy pleasure. Both pork ribs and brisket were way too fatty -- clearly the pitmaster has yet to master the technique that Horse Thief in Grand Central Market has perfected. Collards and potato salad were fine, but it might be nice to offer at least one side included with a meat choice.
Ribs were also on the fatty side, though the sauce certainly helped. Pizza would be better with just another minute or two in the wood-fired oven. The beer selection isn't bad though, and pitchers are just $10 from 4-6 on weekdays and $15 the rest of the time. Maybe ATX or the Crossing or whatever it's called is still getting its barbecue sea legs, so I wouldn't write it off just yet. Because really, I've been waiting for a place like this for a long, long time -- in fact so long that my son can now drink a pitcher with us legally and complain about toddlers underfoot. 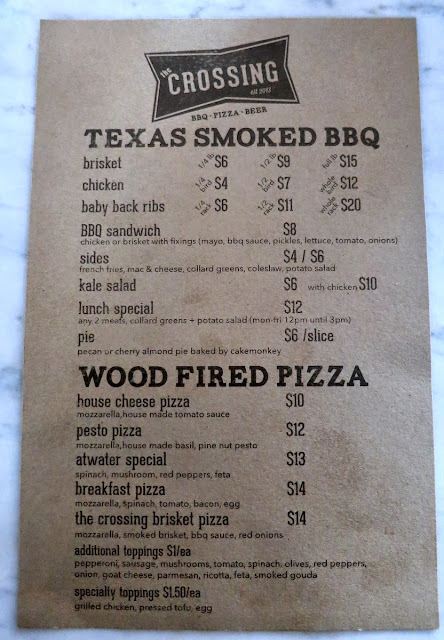 Well I know where I'll be eating tonight, thanks for the review.