The Taste: Bourdain and Lefebvre serve up a preview of their new cooking competition show


ABC's new cooking competition show The Taste premieres next Tuesday, January 22, and it looks like a fun twist on the "Top Chef" or "Chopped" formats. Contestants can be either professional chefs or home cooks, and they have to impress judges Anthony Bourdain, Nigella Lawson, Ludo Lefebvre and Brian Malarkey with just one bite of their dishes in a blind tasting. 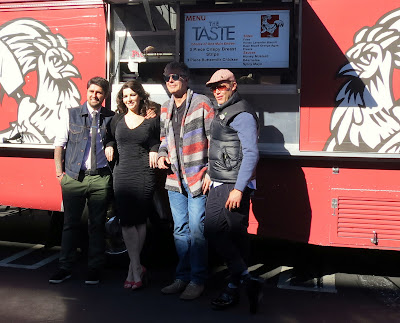 I was invited to lunch on the Disney lot to hear about the show with the judges, other food bloggers and assorted media -- including one stick-thin woman who made Bourdain blanch when she told him her favorite restaurant is McDonald's.
Lawson said the show shot in L.A. over about three weeks, and she's enjoying trying L.A. restaurants like Picca with Bourdain. Bourdain said he loved exploring Koreatown for an upcoming episode of his new CNN show "Parts Unknown" that debuts in April. He's off soon to Libya and later this year will film an episode in Israel, where he's never been. Bloggers sampled Ludo's addictive fried chicken and excellent fries while Lefebvre brought Bourdain a bottle of Pappy Van Winkle bourbon, which he generously poured for the bloggers.
Check out The Taste on ABC next Tuesday, and find out if the home cooks have got the goods to compete against the pros.
at 1:25 PM

That's funny that somebody dropped a McDonald's reference. Hopefully the show's fun. The preview sounded like a good time.