I was inspired by L.A. Observed's post on L,A. photographer William Reagh to go digging into the L.A. Public Library photo archives again for more historic restaurant shots. Photographer Herman Schultheis, for some reason, exhaustively photographed the Rite Spot cafe where Cindy's now stands in Eagle Rock. It looked like a hopping place, with tons of outdoor tables and a rustic setting near the Eagle Rock bluffs. Even more impressively, it's highly possible that it's the spot where someone first had the brilliant idea of slapping a piece of cheese on a burger.

Rite Spot was an offshoot of the Carpenter's chain, a group of diners with several locations including a fun-looking outdoor bowling alley in Glendale and a couple in Silver Lake. Here's what Cindy's looks like now -- it could well be the same original building as the Rite Spot, which looks like it was a lot more fun. 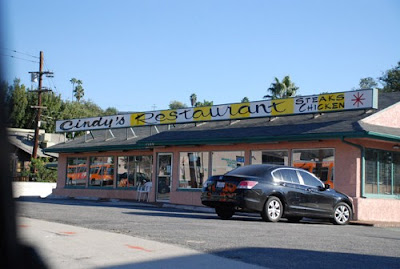 Thanks for sharing your thoughts on this matter. You make some interesting points.

The Rite Spot was farther up the hill of Colorado from Cindy's (you can see the height in one of the older photos) It stood where the Credit Union now stands where Avenue 64 joins Colorado.