The historic building on the corner of Los Feliz and Hillhurst that started as Willard's Chicken Shack then became famous as the Brown Derby had hit a rough patch over the last few years. When I first moved to the area, we had an over-priced steakhouse dinner at Michael's, as it was known after the Derby closed. As Louise's Trattoria wore out its middling Italian welcome and the Derby club morphed into a Chase bank, there were even plans afoot to raze the entire place and turn it into some kind of Whole Foods-containing megalith.
But Louise's founder Bill Chait hung on to the space, closed Louise's and decided to start over, partnering with Rob Seritella on Mess Hall, sort of an updated chop house with a not-too-heavy handed summer camp theme.
We were invited to preview Los Feliz's latest entry in the restaurant wars, one that strikes a balance between a grown-up place to take your dad for a steak with a groovy patio for sipping cocktails before or after the Greek Theater. 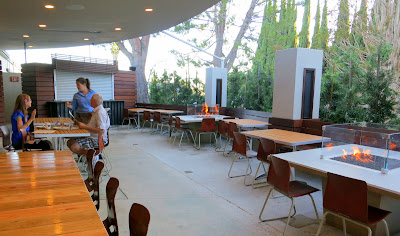 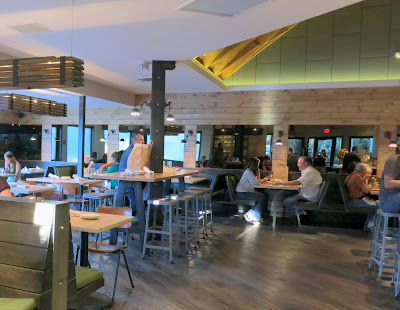 Inside, the dome of the Derby can just be glimpsed on the ceiling. Chase Bank gets the rest of the dome in its lobby.
Eric Lund, formerly of Rivera, is running the bar program. Some of the cocktails sound like Of Montreal had a hand in the naming, like The Downtime (Between Euphoria or Bitter Disappointment), but even the Hallucinogenic Whimies of Banana Man was well-balanced and not too sweet. There's also 300 whiskies if you prefer your liquor neat. 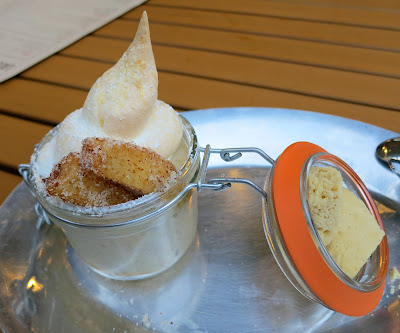 Desserts include a deconstructed banana pie with banana pudding in a Mason jar and cookies on top, as well as cobbler and s'mores. 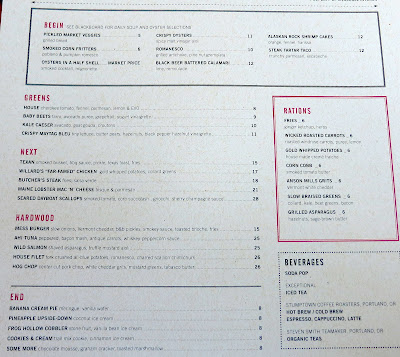 The menu is straightforward with steaks, a burger, pork chop and salmon and appetizers including fried calamari and corn fritters. Brunch and lunch will be coming down the line, with a coffee and juice bar on the comfy patio.

I'm going to read between the lines by noticing you did not make any comments about how the food tasted. (Also, I'm shocked at the menu prices, but perhaps I don't get out very often.)

This was a friends & family dinner, so generally that's considered too early to review the food, which seemed solid if not terribly innovative.

they need to get 65 more whiskies so I don't have to repeat myself when I go there every night.

Hopefully Mess Hall delivers since the neighborhood has a lot of room for improvement, food-wise.

Hopefully somebody else decides to revive Willard's Chicken Shack somewhere nearby. That's a seriously promising name.

I seriously have to get down there to try this place!