Curtis Stone's new cookbook: Seeing how the sausage (and ribs, and cookies) are made 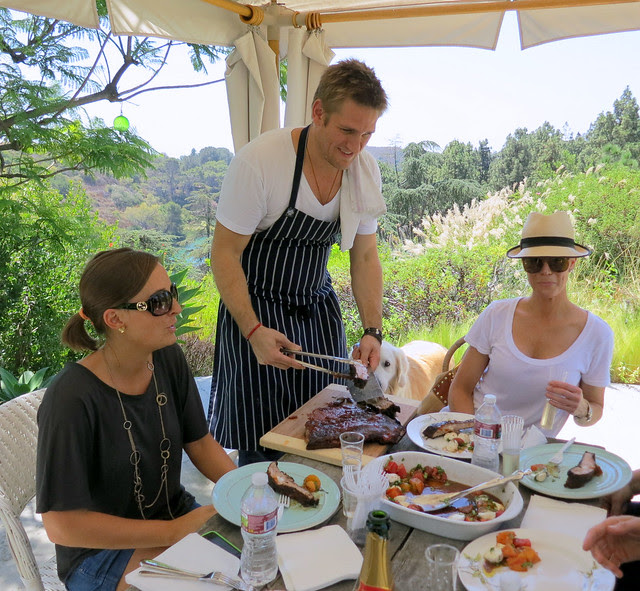 I'm no cooking blogger, but as an enthusiastic home cook (not to mention "Top Chef Masters" and "Around the World in 80 Plates" fan), I felt lucky to be invited to chef Curtis Stone's house to watch a photo shoot for his new cookbook. The book doesn't have a name yet, but it revolves around the uncomplicated, homey, fresh food he specializes in, with chapters themed around the days of the week. Tuesdays are time-saving, Thursdays are thrifty, Saturdays are for entertaining, etc. Here's a slideshow of the prep kitchen in Curtis's garage, props used for the shoot and the shoot itself in his dining room.

We tasted Stone's terrific ribs, which he ever-so-modestly pits against every barbecue joint he's been to, a coleslaw that I'll be replicating frequently when the book comes out, as well as zingy vegetable lasagna, chili with lots of trimmings and Caprese sandwiches loaded with cheese, garden tomatoes and pesto. It was fascinating to see the array of props gathered for the shoot: antique dinnerware, rustic linens, Mexican sodas, weathered wood tables and of course Sully, the beautiful lab who will hopefully make it into a few shots. Stone, who lives in the Hollywood Hills with actress wife Lindsay Price, also showed us his bountiful kitchen garden, complete with caper bush, professional-quality barbecue area and then we sampled dishes from the book next to the pool overlooking Lake Hollywood. I'm looking forward to seeing the finished book, due out in a few months, both for the finished shots we saw being composed and to cook some of his unfussy dishes.
at 11:21 AM

What do you think, best ribs ever?

Yeah, any hints on the rib rub? Looks wet, and delish! What a great time that you were invited over. I like him and am a big fan of his shows. Thanks for the heads up on his upcoming cookbook too!