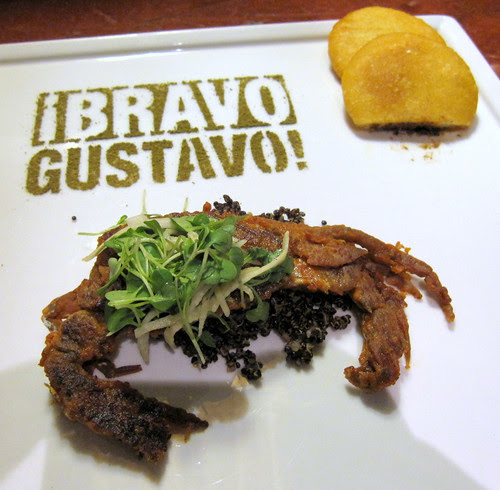 Rivera's menu was already a fascinating combination of unexpected flavors, but many of chef John Sedlar's dishes, like the famous tortillas florales and moles, leaned towards Mexican traditions. Now Rivera has added several new menus combining Spanish and South American ideas. Many of Rivera's earlier dishes are now featured on the Conexiones menu, which connects Latin dishes to more modern California cuisine. 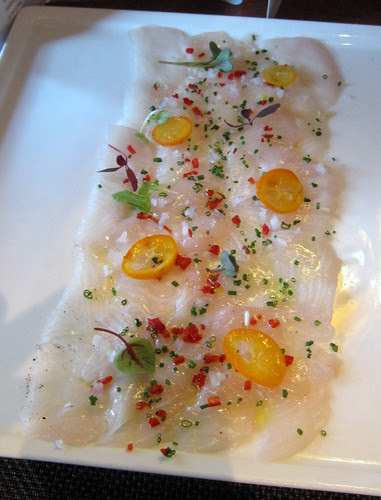 A recent blogger tasting introduced the new menus, and I was happy to see some dishes inspired by the trip to Tijuana that Sedlar came on with StreetGourmetLA and a group of bloggers, such as the hiromasa crudo with kumquats, above. 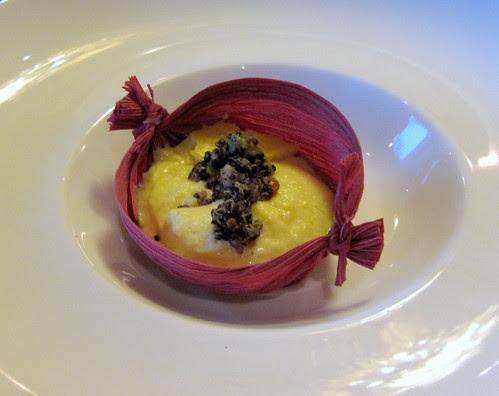 From the Conexiones menu, I loved the delicate flan de elote, with a lightly sweet corn custard in a pretty colored tamale wrapper. Another hit was a simple Ecuadorian crudo like the ones we tried at Tijuana's La Querencia, with slices of raw hiromasa fish, kumquats, Fresno chiles and chives, and Argentine wild
mushroom carpaccio from the Latin American Samba menu, served in a similar style. From the Mexican Playa menu, we were a little bemused by the $50 Cabeza de Oro, a gold head figurine piled with foie gras, seafood and caviar. But Chile guero relleno -- a crab-stuffed tempura chile with a soy-spiked sauce, make a rich and savory appetizer, and  Columbian-style softshell crab comes with a bonus of petite Venezuelan corn arepas. 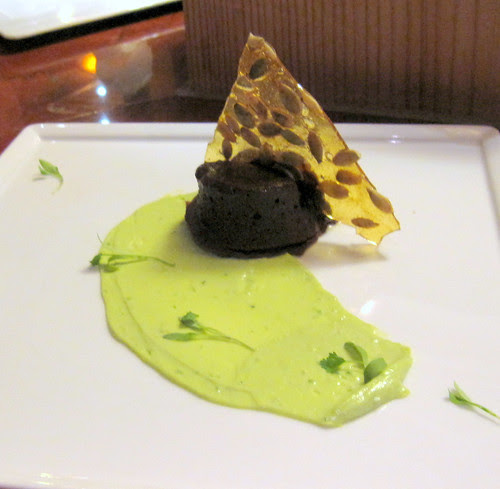 New desserts have been added, and the flavors of Xochimilco, an ancho chile cake with avocado mousse and pumpkin seed brittle, work together much better than they might sound.
More adventurous eaters should try Hielo y Fuego, a palate-cleansing dessert, a pure and fiery sorbet of poblano chiles with a port sauce that really gets the chile-activated endorphins going.
As Sedlar prepares to open R26 in the former Grace space, he's continuing to make Rivera downtown a worthwhile trip to discover Latin flavors in ways you never realized they could be combined -- and of course, a wonderful cocktail destination as well, with Julian Cox's mixology at work.
The various menus are served at different locations in the restaurant, so ask ahead when you make reservations. There's also an eight-course tasting menu available for $70 if ordered by the entire table.
Rivera Restaurant
1050 S. Flower St.
213-749-1460
at 6:08 PM

we were just there last sat. nite and tried the new menu. some things were just delicious but many were a little overseasoned i felt, given the very small portions and the tendency to undercook the seafood. both the soft shell crab and lobster were undercooked and their flavors were lost in aggressive seasoning. (salt!) too bad. some of these things you're showing look great! i did think the crudo was delicious. but i wonder.....

I wasnt blown away when I went to Rivera, but that softshell crab and arepa combo sounds delicious