Brent's Deli is the real deal: The classic series 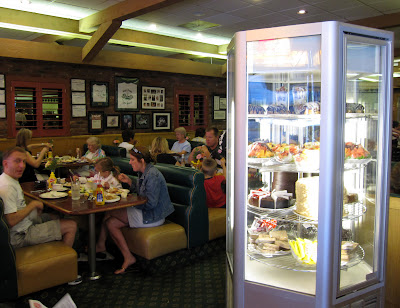 I grew up eating at Nate 'n Al's, so that's pretty much my reference point for delis. But the Chowhounds and everyone else say Brent's Deli has an edge on Nate 'n Al's, so when I had to be near Northridge for a family occasion, it seemed like high time to see what all the fuss was about. My sister was visiting from Berkeley, where she lives a short walk from Chez Panisse and the Cheese Board, but miles from any decent deli. Walking into Brent's, the aroma of a classic deli is instantly evident: lox mingling with salami mingling with rye bread and pickles.
The menu is vast, with an odd "specialty items" section that encompasses both tacos and potato pancakes, stir-fry and blintzes. Langer's pastrami is the best, but I ordered a brisket sandwich for proper comparison with Nate 'n Al's.
My sister went with an egg salad/chopped liver combo, which seemed an inspired combination. Brent's rye bread seems darker than Langer's or Nate 'n Al's, and it has a nice crunchy crust. Like Nate 'n Al's, the brisket is a touch dry before brown mustard is added. Truthfully, I think I prefer a Nate 'n Al's brisket or a Langer's pastrami, but Brent's is certainly the real deal, with a fine bowl of pickles on the side, decent prices and all the smoked fish and sliced meats a person could possibly want. If I lived remotely near Northridge, I'd certainly be back to try the blintzes, the pastrami, the chopped liver and in honor of my late father, salami and eggs. What's your favorite deli?
Brent's Deli
19565 Parthenia Street
Northridge
(818) 886-5679

I once had to work in Chatsworth for a whole year, and the only solace was Brent's. I had to keep it to once a week, but that Cabbage Soup is the best!

I love Brent's, next time you go try the black pastrami reuben.

Art's in Studio City, "Where every sandwich is a work of Art."
Been going there since I was born 40ish years ago.

Is it lunchtime yet?

Next time try the pastrami at Brent's. For me, it's a very close second to Langer's. Langer's pastrami is thickly hand-cut; Brent's is thinly machine cut. Both are divine, piled high with cole-slaw on scrumptious rye bread!!! Yum!!!

i too grew up on nate n al's and factors, migrated to greenblats and have enjoyed a brisket sandwich at that old old deli in dowtown glendale (thanks jonathan gold!), and my father lives near the westlake brent's. it sure is busy and it smells like a deli, but i found the corned beef to be decidedly not up to nate n al's or even canters. i should give it another try, i guess.

Definitely try the cheese blitzes next time -- best blitzes I have ever had!!

I grew up eating at Brent's regularly with my grandparents. It is the Jewish deli by which I compare all others...even after I moved to NY for college. Brent's has catered every graduation and funeral in my family. You want the best Jewish rye bread in LA? Go to the Delicious Bakery on the NW corner of Reseda and Nordhoff.

I like Brent's too, perhaps even more than you: http://www.savoryhunter.com/2010/03/brents-deli.html

I thought the corned beef was delicious.

OK LA WAKE UP...This is the place to go to if you want the worst service,
busboys who do not know what a sour pickle is and to get a BIG dose of attitude.

This place is for people who do not know any better. I have gone through several review websites and one person summed it up perfectly.

If you want to have an great experiance with REAL FOOD AND REAL PEOPLE head over to Labels Tables where the food can not be topped and the people are humble and treat you with respect.