At Friday's Twitter-convened blogger lunch, which somehow mushroomed to about 10 people, Starry Kitchen owner Nguyen Tran announced that it had been their biggest day in three months of business, so he's treating customers to free sodas on Monday in celebration. The irrepressible Tran and his wife Thi are glowing with pride due to Starry Kitchen's near-instant popularity with the Downtown lunch crowd. And there's good news for those who don't happen to be Downtown during Starry Kitchen's weekday lunch hours: in just a few weeks, they'll be open for dinner on Thursdays and Fridays, just in time for the California Plaza free concerts during the summer. 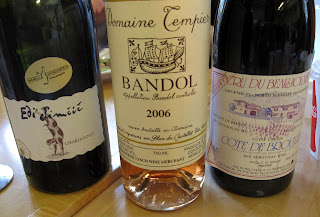 Now, on to our lunch. Clearly, not everyone gets to sample pan-Asian dishes like Malaysian free-range chicken curry on coconut rice with three great wines the way we did, thanks to sommelier David Haskell, who brought the wines and helped us pair them. But Starry Kitchen's rotating array of home-style Vietnamese/fusion dishes -- from Japanese meatball curry made with Angus beef to lemongrass chicken -- would be delicious even without wine. Lunchers can choose the daily selections in a banh mi, a wrap, a salad or with rice, at reasonable prices -- everything is around $8 or $9.
It was the last day of braised coconut jackfruit, nearly a dead ringer for Vietnamese stewed beef with lots of star anise, which went well with the red Cotes de Brouilly. I always love Domaine Tempier Bandol rose, and it seemed especially appropriate to be drinking it during the Cannes film festival, even if it was paired with chicken curry in the middle of Downtown L.A. Korean japchae noodles with earthy shitakes were also a
good match for the red wine. Starry Kitchen's coleslaw was perfectly balanced, on the creamy side but not sweet or cloying. I'll bet it would be a great match for the famous crispy tofu balls, which are coming back on Monday.
Starry Kitchen is a super fun place, with owners who clearly love what they do -- Nguyen seems to be having a great time, especially compared to his former life as a film producer's rep. The food is closest in style to Good Girl Dinette, but with lots of their own imaginative twists. Nguyen says they're hoping to expand, so I'll be a happy eater if Starry Kitchen shows up in Silver Lake, mid-Wilshire or Pasadena.
Starry Kitchen
350 S. Grand Ave. (California Plaza)
213-617-3474

Wow! Thank you! I always wanted to write in my site something like that. Can I take part of your post to my blog?