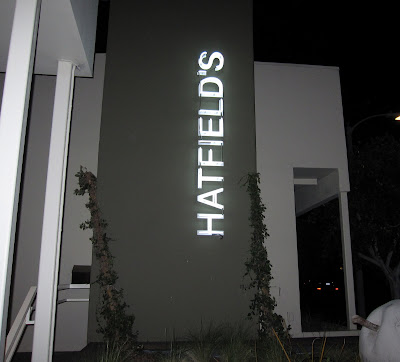 All traces of the very scarlet Red Pearl Kitchen have been wiped clean, and the restaurant now sports a clean, airy look closer to its original tenant Citrus, with a lively open kitchen design.

I always wanted to try Hatfield's, which moved into a compact cottage on Beverly Blvd. and opened with much buzzy fanfare. But I never found just the right special occasion worth the splurge, so I was thrilled to be invited to try the new larger Hatfield's on Melrose. So I can't say whether the new incarnation, which opened three weeks ago, is better, only that it's very, very good.
And Hatfield's is lucky enough to have Karen and Quinn Hatfield overseeing the assured cooking, but also the charming and knowledgeable Peter Birmingham as sommelier. 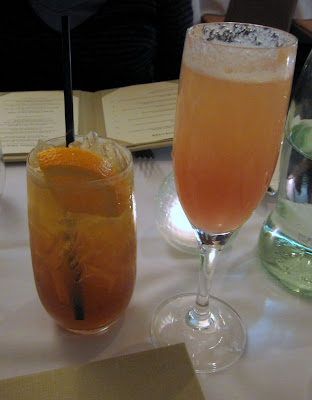 Birmingham insisted we start with something from the intriguing cocktail menu. A rhubarb Bellini and a a modern take on a whiskey sour with Earl Grey-infused rye and maple syrup kicked the meal off in style. 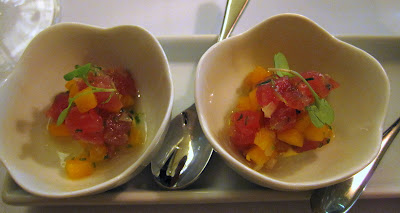 The amuse of yellowfin tuna, squash and lime with curry had a seductively creamy texture. 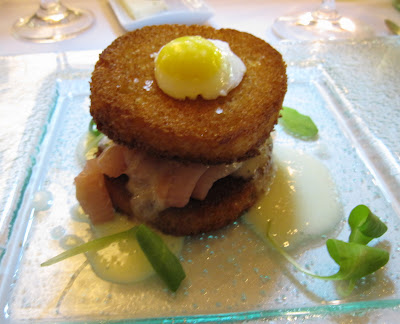 I had to try the famous Croque Madame with brioche, yellowtail, proscuitto and a quail egg on top. Cool, delicate raw fish, ultra-buttery, crispy brioche, salty ham and rich egg all do little dances in different pairings in your mouth, making a knockout start to the meal. Don't miss this dish if it's your first time at Hatfield's. 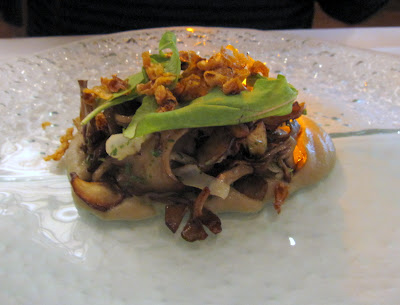 Cuttlefish salad was a complex and satisfying mix of maitake mushrooms and thinly-sliced cuttlefish (similar to squid) on a bed of sunchoke puree. The chefs smartly use a variety of mushrooms to deepen the flavor in several dishes. 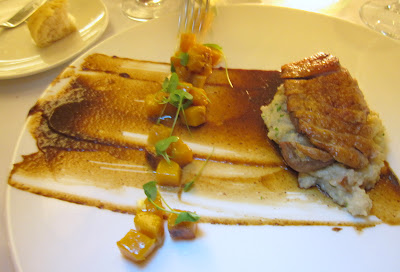 The fork at top is Kathy trying to steal a piece of butternut squash from my duck breast with whiskey prune smear and quinoa with porcini. The quinoa porridge strayed far from its crunchy, healthy rep into the realm of rich risotto, while the duck breast had crispy skin and nicely-cooked interior. This dish was perfectly executed, yet it was a bit of a letdown after the sheer decadence of the croque madame. 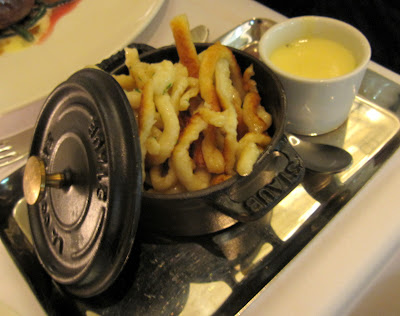 Kathy's pan-roasted New York steak (not pictured) was also cooked just right with a side of deeply green, butter-laden longbeans. Again, a competent piece of beef, but it won't push thoughts of bacon sandwiches out of your head. (Oops, I swear, that's not what I spend my days thinking about.)
The steak came with an adorable mini-casserole of crispy spaetzle, with a creamy dipping sauce. The spaetzle were more floppy than crispy, and while the German pasta was an imaginative alternative to steak's usual sidekick of fries, in the end you just kind of missed the fries. It seems like spaetzle is best enjoyed with meat juices mingling to form an impromptu sauce, rather than on the side. 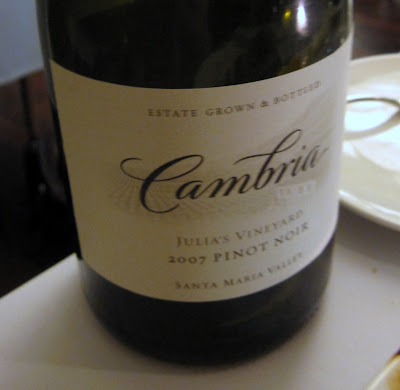 When S. Irene reviewed Hatfield's back in 2006, she dinged them for not having enough wines under $50 a bottle. Under Birmingham's watch, this has been remedied with great values like this lush Cambria pinot noir for $42 and quite a few other great choices like Portugal's Dao Sul. 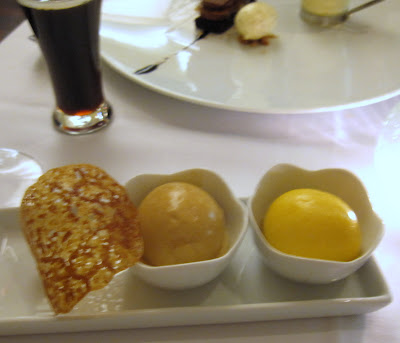 All the ice creams and sorbets are house made, with a selection of at least six a night. I loved the butterscotch rosemary ice cream on the left, particularly with a glass of Moscato d'Asti sparkling dessert wine. 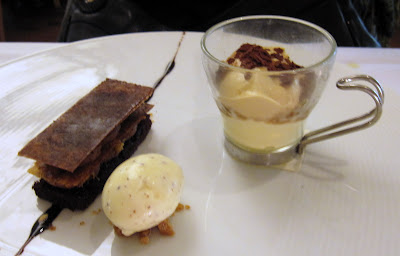 Kathy always orders a chocolate dessert: I was happy that her chocolate mousse Napoleon with espresso affogato parfait had a delicate chocolate-coffee interplay instead of a heavy, sugary onslaught. It was dynamite with the Boilermaker cocktail, an inspired combo of oatmeal stout and Tawny port. Try not to skip the dessert wines and cocktails, which really add to the experience.
The verdict: As at so many restaurants, the entrees seemed slightly less interesting than the appetizers, cocktails and desserts -- maybe date-crusted lamb or Tasmanian Ocean trout would have been more inspired choices.
But it's a minor quibble -- this was a lovely, civilized meal in a comfortable room that was quiet enough for conversation. Service is friendly without being stuffy.
A four course seasonal prix fixe menu is available for $56, while entrees are $26-$36.
Would I go back on my own dime? For sure, if I was looking for a grown-up but laid-back meal, with cooking that's spot-on without being fussy or molecular.
Good news: And I'll definitely go back when Hatfield's starts opening for lunch next week. Like Eva, which took over the little Beverly Blvd. bungalow, Hatfield's plans a $19 three course prix fixe lunch, which is great news for the industry folks who have eaten at Campanile way too many times.

Hatfields is surprisingly affordable. Even their 3 course 45 dollar dinners before they moved.

Extremely important question: Is there a bar or counter for solo eaters?

there is a bara nd a bar menu. no cheese though

Ooo...your photos are absolutely exquisite! Good enough to eat off the computer page. =) I am new to the blogging world and so I'm delurking to share that I'm quite excited to have found your blog that will help me naviaget my way through the many delicious L.A. restaurants.

Good recap of your Hatfield's experience. I ate there on Tuesday night and thought it had improved since my meal on Beverly. That croque madame was phenomenal. Desserts were another highlight. That boilermaker sounds really good.

i can't wait to go for lunch!