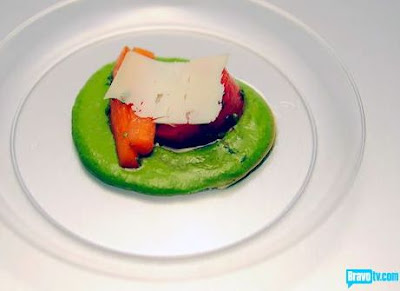 It's down to just four contestants now, and for the first part of the finale, the chefs must cook on the Napa Valley Wine Train which one of them says "is known for great food" -- I'm not so sure about that, but cooking in a dining car kitchen is definitely a challenge. The Quickfire prize is worth it -- it's a brand new Prius, which Jennifer could really use to replace her aged vehicle. She almost looks happy thinking about getting a shiny new car, but not quite.
The winner: All the chefs must incorporate grapes in their dishes, but creative Michael has the brainstorm to include a grape leaf stuffed with couscous and ras el hanout in his dish, which elevates the whole concept. He thinks he's so hot, just because he throws ras el hanout into pretty much everything. He wins the challenge, to which spiteful Jennifer says, "Screw him!"
For the elimination round, Jennifer tries to summon some enthusiasm, proclaiming that she wants to "cook her ass off!" but I'm not sure her skinny butt has enough to spare.
At the Rutherford Winery elimination challenge, they have to cater a crush party for 150 people, cooking only with local ingredients. The chefs gather armfuls of farm fresh eggs, Sonoma duck, grass fed shortribs and brisket and beautiful produce. But just how much does 150 portions of foie gras actually cost?
Bryan tries to stir up a little trouble, charging that Michael probably hasn't put much thought into cooking with local products -- it's true that his approach seems more elaborate than rustic.
The winner: Michael's dish looks amazing with a cylinder of foie gras, purple turnip, turnip green soup and pear. Kevin wins some acclaim for his pumpkin polenta. But they like Bryan's goat cheese ravioli the best, although I didn't get the impression they were that excited about his fig-glazed shortribs.
The loser: Jennifer's doesn't look that bad, but someone has to go, and finally they can't look at her sour face anymore. She makes her worst grimace ever at the news, and then starts to cry. "Love you guys," she says unconvincingly on her way out the door. Now it's just the boys -- no more playing nice for the ladies!
Did you think it was finally time for Jennifer to pack her bags?

Foodie vocab:
Ruby quinoa -- Quinoa is a cereal-like grain that's high in protein. The ruby variety is a prettier color with a nutty taste.
Pea tendrils -- long popular in Asian cooking, chefs are discovering uses for snow pea tendrils to add greenery and freshness to other dishes.
at 8:28 PM

"She almost looks happy thinking about getting a shiny new car, but not quite." Hilarious. Jennifer always looks so tortured. Is it really that painful to compete on Top Chef?

This episode was pretty tense. I thought Kevin's short ribs were more of a disaster than a little over-salting, though maybe it was REALLY heavy. She had a shot at it with the duck since they loved it. Really too bad, but predictable in the end. I think Tom will miss her most of all.

Pat, If you haven't come up to the Napa Valley Wine Train and tried our food, I would love to invite you.

Our Chef has been getting a fair amount of notice lately, with some great reviews. We even just won the Best Of Wine Tourism Restaurant from the Great Wine Capitals.

Can I entice you to try it yourself? Cheers, ML

Your blog is super. So are your photographies. They make me hungry. I have spent a nice moment when seeing them. Thanks a lot.

I thought Kevin was a lock to win it all. He messed up big time.