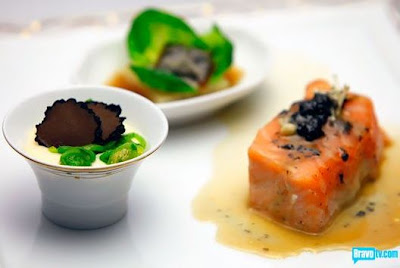 Jennifer's poached salmon, shrimp flan with truffles and celery root with shitake mushrooms. Padma agrees it was the most intriguing visually.

There are very few smiles left in the kitchen stadium -- oh wait, that's a different show. Anyway, as the show gets underway, the mood is tense and just a little nasty, as Michael Voltaggio looks ready to throw Jennifer under the bus, sniffing, "There's not a whole lot left for her to do." Later, he snipes, "The food Kevin makes is what I make on my day off."
Still looking miserable, Jennifer explains that maybe she had become unfocused.
Judge for the Quickfire challenge is Gavin Kaysen, who competed in the Bocuse d'Or competition, which is also the them of the show.
It's turducken time on the Quickfire, where the chefs are asked to stuff a protein in a protein in a protein.
Eli has a clever idea to make a Scotch egg; Bryan incorporates caul fat wrapped around his lamb tenderloin and Kevin once again reverts to his Southern roots with too-dry fried catfish. Michael kinds cops out with a terrine instead, and gets smacked by Kaysen for not following directions.
The winner: "Welcome back," Padma smirks to Jennifer, who'd thought she lost her mojo. Her calamari stuffed with salmon and scallops looks simple, but it was cooked properly and impressed the judges. Either that, or they need to keep Jennifer on to add a little female-male tension right up to the end. Her prize is an extra half hour worktime on the elimination challenge.
Elimination round: The chefs will recreate a Bocuse d'Or competition with a protein (either lamb or salmon) and two garnishes served on a giant oval mirror. Thomas Keller is one of the judges, a perfect tie-in with the opening of Bouchon Bistro Beverly Hills today.
When Kevin asks for sous-vide cooking advice, Brian is in awe of his nerve, and implies that Michael might not have been as helpful. Is it the truth, or just an effort to sabotage his brother?
Wha' happened? Pretty much all the Bocuse d'Or dishes are failures on some level.
As usual, Michael's food looks fancy but lacks taste --judge Traci DesJardins agrees that the flavors don't go together.
Random observation: Jennifer helps out the others because she has extra time, but I feel like the men wouldn't do that. Butch up, Jennifer!
While the dehydrated garlic chips on Bryan's dish impressed Keller, his lamb and Eli's too were both undercooked and tough. Yuck.
I'd eat that: Eli's side dish of ras el hanout and carrot puree sounds like a winner.
The winner: Kevin! He says $30,000 is almost what he makes in a year, but will his cooking be complex enough to compete in the Bocuse d'Or? His dish was almost too simple, but it was the only one that was actually cooked correctly.
The loser: I knew it had to be Eli, who left globby pieces of fat in his lamb sausage. They need to keep the brothers to keep the competition going, and Jennifer provides a marginally female contrast to the brothers, so it had to be Eli. I'm kind of sorry to see the little troll go, he's actually tearfully snorfaling.
Did you think Eli was the obvious choice?

It's Kevin's to lose. Kinda sad to see Eli go, but I knew it was coming. Michael can be a real pr*ck, as his brother might say. He's next to go, I hope, unless Jen loses her cajones.

hi.. just dropping by here... have a nice day! http://kantahanan.blogspot.com/

Jen needs to find the joy again, but I think Kevin is leading the pack - I'm hoping a little more love is in the food next week... Oh yeah, and God Bless 'em, I couldn't do that.

Glad Jennifer stepped up- I don't think she got a pity vote in the quickfire- her dish was the most interesting and seemingly well-executed. Kevin has been my hands down favorite all season and I hope he continues his winning streak. Bryan has a quiet rage bubbling underneath that cool exteroir and it's all directed at his bitchy brother....and he acts on it, ha! Michael should just shut up and cook already. If he's so good, why does he feel a need to rag on everyone?

I think if Jen keeps her head together she has a good chance.....but I'd say Bryan is the frontrunner.

This is the Final Four I called months ago. So happy! I think one of the Voltaggios will be the next to go. I hope so anyway. I don't want to lose Jen, and Kevin is too good to go. I think he'll probably win. Michael is getting really annoying, though I do want to try his food at the Langham.

Thought it was sort of a given from the get go that Eli would be the one sent home. It's been pretty clear that Kevin, Michael, Bryan and Jenn are the top competitors - glad Jenn was able to get her mojo back! There is more that she can do, Sir Voltaggio!

Regarding 'Butch up" Jennifer - nope, don't agree. Think of how gracefully Bryan handled Kevins request for help. That, to me, was true chef behavior. And no Bryan wasn't sabotaging his bro - Michael would have NEVER helped a competitor at this stage in the game.

And while I have never cooked calamari, I've had enough tough plates of it in good restaurants that it's gotta be hard to cook - Jennifer's quick-fire win was not a pity win by any means.

On a not totally unrelated note - did you see Padma on 30 Rock? Genius, pure genius!

Michael, the arrogant bastard, needs his head handed to him on a platter -- I've worked with my share of jerks; one of the other chef's should call him on it. And, of course, he is has to be the best and most imaginative chef left!