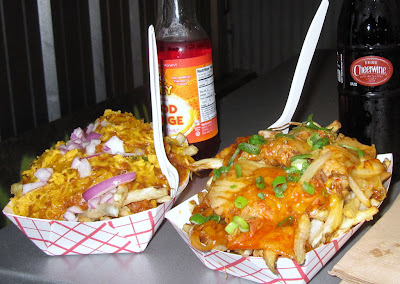 We stopped by the Frysmith truck last night for a taste of the long-awaited fries from Erik Cho and his wife Brooke Howell. Erik learned the frying trade first at his mother's knee, working in her hamburger joints, and then at tony bistros like Berkeley's Cafe Rouge, where he perfected his technique. Inspired by his love of good fries, he's launching the Frysmith truck this week with the grand opening (free cookies!) Friday night in Venice. 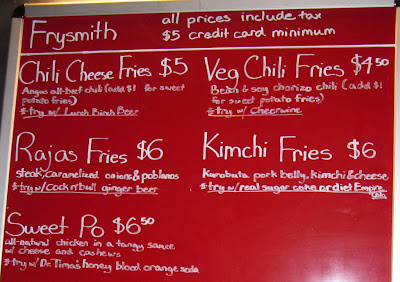 For now, Erik's menu is pretty tightly controlled. All fries are served in main dish portions, topped with proteins like pork belly with kimchi, rajas with steak, sweet potato fries with barbecued chicken or vegan chili. He doesn't serve fries a la carte, and like Father's Office, he doesn't serve ketchup -- at least not until he perfects his own recipe.
He's definitely got the frying technique down, and the fries (cooked in canola oil) were perfectly cooked, with just enough crispy brown bits at the bottom of the tray. The Kimchi with pork belly topping would make a hefty late-night snack with a good beer. Pairings of sodas like honey-blood orange or Cheerwine are suggested with each variety. 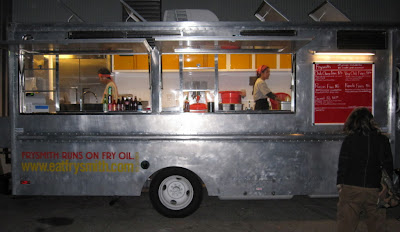 The truck has one final tryout run tonight in Eagle Rock and then at the Bigfoot before tomorrow's grand opening; follow them on Twitter to find out where to find Frysmith.
at 11:16 PM

It would be hard to go wrong with any of those selections!

Stodge-a-rama in all the best ways?

Man, chili fries and a bottle of Cheerwine? What could be better?

OMG. Why must I be on South Beach Diet now? Why, God, Why?

I can see hitting up Frysmith for those kimchi and pork belly fries. That pretty much has to happen.

How do the fries compare to those at Wurstkuche or the Oinkster or Father's Office?
Talk about some serious fries competition lately.
And kimchi and pork belly fries do sound mighty tempting.