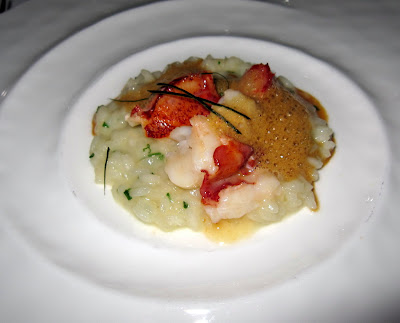 Sona's lobster risotto with kaffir lime leaf and shellfish emulsion should be experienced at least once.

Sometimes it's hard to keep track of Sona's chef/owner David Myers. He opened and closed a few Boule Bakeries, opened Comme Ca and Pizza Ortica, which are going strong, and he's contemplated opening more places everywhere from Downtown to Orange County. Despite a recent change in the management company of the restaurant, Myers is very much still in charge at Sona, and is doesn't seem possible that the fetchingly boyish chef has already been there seven years.
I'm so glad I finally got to eat at La Cienega Blvd. restaurant, one of L.A.'s most grownup spots with a quietly elegant room you can actually converse in and very attentive service. A meal at Sona is full of thoughtful touches, from the yardlong cheesy breadsticks to the cutest Barbie-sized salt and pepper macaron ever on the plate of mignardises at the end of the meal. Myers' cooking isn't quite as surprising as as when Sona opened seven years ago, but it's still one of the more imaginative menus in town, as long as you're not afraid of foam, espuma and the like.

Standout courses were impossibly rich, yet delicate lobster risotto with refreshing kaffir lime leaf and roast duck with smoky eggplant puree. The anniversary menu is available Tuesdays through Thursdays this month for $77. Reservations can be made at (310) 659-7708. 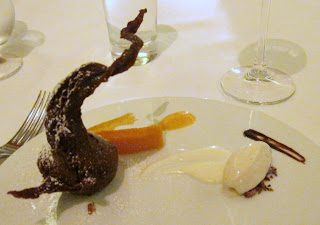 Sona's lobster risotto is a dream!

I can't wait to try the risotto! I'm going next week and am looking forward to the 7th anniversary menu

I LOVE Sona! My favorite restaurant in LA! Thanks for letting me know about the anniversary tasting menu - I love the lobster risotto!

Here's a review I published on my blog of the 9 course tasting menu at Sona:

I am so glad to hear he is indeed NOT closing Sona. It's near the top of my list of favorites in the city.