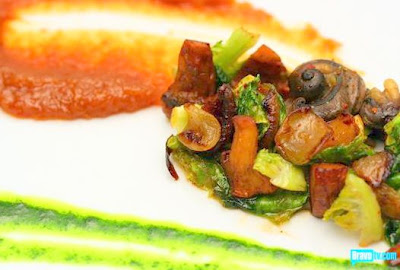 As someone on Twitter said, "Bacon jam. That is all."

Obviously, since it has already aired, there could be SPOILERS in this post.

Tonight's Gallic-themed episode of "Top Chef" was intimidating for some of the chefs who weren't familiar with French cooking. I thought you had to learn all those sauces and such in culinary school, but maybe some of them learned from experience. Daniel Boulud was guest judge.
High stakes quickfire challenge: None of the chefs seem to know much about tonight's ingredient escargot, except Mattin. Mattin has just a touch too much French attitude, so it seems clear he's being set up to be the sacrificial agneau. In this high stakes contest, the loser will go home.
The winner: Kevin prepares his escargot in a fricassee with mushrooms, Brussels sprouts and candied bacon jam -- hot damn! Natch, he's the winner.
Requisite lesbian tension: The losing lesbians are pitted against each other for second chance. Ashley looks so hot and cerebral in her horn-rim glasses and tattoos.
Random: They're loving cooking with ramps today.
The loser: Whoa, Jesse is out! Most people don't really like looking at pierced lips on food personnel, so that's one more down for the body mod crew.
Next round: Each pair of chefs gets a classic French sauces to pair with a protein.
Mattin feels like his grasp of French cooking almost automaticallly makes him a winner, but methinks pride cometh before a fall. They'll be cooking for esteemed chefs Hubert Keller, Laurent Tourondel, Boulud and Joel Robuchon, who practically makes them all fall down and salivate with fear and awe. Kevin gets to have dinner with them, since he has immunity from the last round.
Robuchon doesn't speak English, but as a certifed Frog, he finds Robin and Ron's frog legs with lemon confit not nearly froggy enough.
The judges love Mike & Bryan's deconstructed, sophisticated trout with bearnaise and Jennifer and Michael Voltaggio's rabbit. "Very mature work!" says a judge.
Stupidest idea: But cocky Mattin and fetching Ashley make a misstep with their fussy dish of poussin with chicken ravioli and too much bacon in the bechamel sauce. C'est banal!
Another misfire is Hector and Ash's chateaubriand with sauce au poivre, which is overcooked, badly sliced, with not enough sauce.
Hector doesn't know how to be delicate, and we learned that under-rested beef is almost as bad as under-rested writer, like me at the moment. These brothers can do no wrong. He gets invited for a weeklong stage at Joel Robuchon in Vegas. Somehow they can figure out that Mike didn't have as much to do with the dish. The Loser: And it's Hector! He wanted to represent his people longer, but he was just a little rough around the edges. Lo siento, Hector.
Now, I must go rest myself, like the chateaubriand needed to do. A la prochaine mercredi!
at 10:04 PM

Bacon can do no wrong. If a bacon dish doesn't claim victory, it's the chefs' fault.

I thought it was an excellent episode; lots of drama and smart comments on all sides. Loved Joel Robuchon! What a coup for the show! Colin thought they must have upped the budget for this episode. However, the rampant product placement (close ups of the car logos; Whole Foods) and the pop-up onscreen promos for other Bravo shows are getting annoying.

Only on a cooking show would the prize be to work in a kitchen!

and we must see more of the budding romance between jenn and michael v.