Jonathan Gold tells the Culinary Historians: "Yes, there will be another Counter Intelligence...someday" 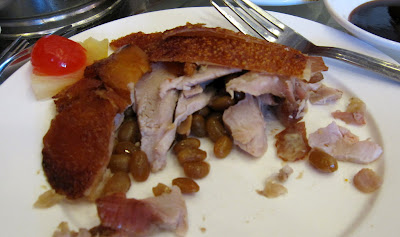 When eating with Jonathan Gold, crispy pig skin is inevitable.

For anyone still toting around a tattered copy of Jonathan Gold's "Counter Intelligence," do not lose hope. Gold told the Culinary Historians of Southern California that he does plan to update the book and this time will definitely include an index by neighborhood -- although he was vague about when we might actually expect it.
Gold gave the audience a tour of regional cuisines of the San Gabriel Valley via a rambling list of 25 or so of his favorite Chinese and Vietnamese restaurants from 1975 to the present. The laidback presentation was more fond reminiscence than some of the Culinary Historians' more scholarly subjects, starting with Gold's first dim sum east of Downtown at the restaurant that is now NBC. Just as I began trying to remember my own first San Gabriel Valley experience, he came up with what it was: Deli World, a cafe overlooking a supermarket that was one of the first places to serve soup dumplings. Harbor Village (also next on my list), Quanjude Duck, Tung Lai Shun...it was a test of memory to recall which ones I had also tried. Touching on Islamic, Hunan, Sichuan, Cantonese, Hong Kong cafes, Chiu Chow and Vietnamese places, he pointed to the cross-cultural influences at Boiling Crab as one of his favorite examples of melting pot L.A. 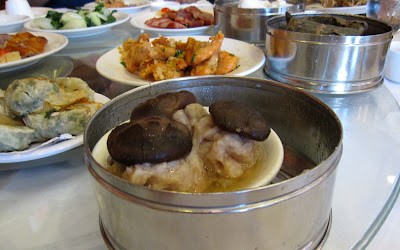 Pork and shrimp balls topped with shitake caps were a new item to me.

After the talk, I biked over to meet some of the historians and Jonathan at Ocean Seafood. The dim sum was so-so, but getting to talk to Jonathan about Noodle Island, Earthen, Vietnam and some of his other favorite spots is always a good time.
Here are some of the restaurants he mentioned. Feel free to add your memories or ones I missed from his talk in the comments.

1. Ocean Seafood is NOT that bad.
2. Any chance of a list of places mentioned?

Deli World...was that the cafe that used to overlook Hong Kong Supermarket on Garvey/Garfield?

HKS also had a great banh mi place as well as a shop that made dragons beard candy. I loved watching them make banh mi and dragons beard candy as a kid. Funny how I took those things for granted back then considering banh mi is so "in" today.

Heavy Noodling is back and kicking as JYTH. The dao xiao mian in various soups is back as well. Been open since May. See here as well as Chowhound thread.

That was Golden Shark that preceded NBC at 404 S. Atlantic Bl.

The UG girls loved it. A meal that was, dare I say, better than sex: http://uncouthgourmands.com/2009/10/12/celebrate-good-times/

My favourite Chinese New Year food (though you sometimes find it all year round) is the Dragon Beard Candy, an ancient Chinese Emperor’s Dessert. It’s made into very sweet thin strands and sometimes filled with peanuts.
If you’ve never tried it, you simply have to! The only place I know to find this online is http://www.geocities.jp/family_hong_kong/English/Dragon_Bread_Candy_index.htm .