Chung King: How do you say "spicy" in Chinese? 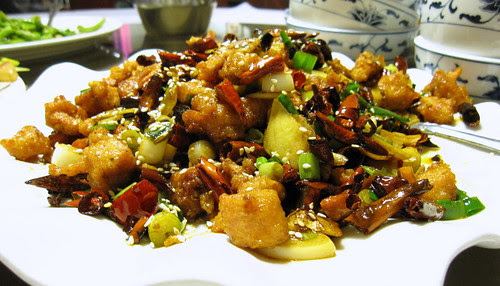 I know more Thai than I do Chinese, so I can say pet-pet or pet-ma if I want my food spicy or medium spicy. But maybe it would have helped to know the Chinese for "spicy, please" at Chung King the other night, when five of us including FoodGPS and Mattatouille returned to see how it was holding up (I first wrote about it in August 2003, before I started the blog). A Chowhound post warned that the venerable Sichuan place, which moved from Monterey Park a few years ago, might be "whitewashing" the food for non-Chinese diners. And while the first burst of flavor was still intense and satisfying, we realized by the end that it was definitely lacking in mouth-numbing Sichuan peppercorn flavor as well as the usual jolting heat.
If a basic San Gabriel storefront restaurant can be said to have a "signature dish," Chung King's is probably fried chicken cubes. The golden chunks were showered with the usual flurry of dried chiles, and disappeared fast as even the more sensitive eaters of our group were able to partake in the usually hallucination-inducing dish. 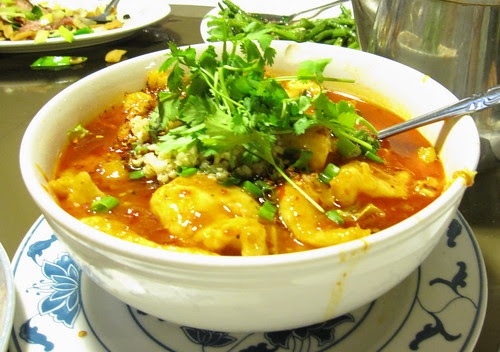 Beef and tofu small pot had just a hint of spice, despite looking like a vat of seething chileosity. At the old Oriental Pearl, I had several dishes like this that left me needing a beach towel to wipe down afterwards. 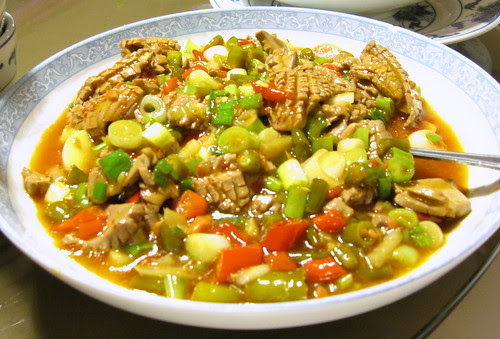 Since we were with Josh "Offal" Lurie, we had to order pork kidneys with pickled peppers. They were considerably nicer than the nasty steak and kidney pie I mistakenly ordered in a British pub years ago, probably the last time I had kidneys. Tender and non-liverish when hot, the scored slices of kidney paired well with the preserved peppers. This dish needs to be eaten right out of the wok though, as it gets less appealing as it cools down. Sauteed green beans were as good as ever, while bacon and turnips would make the perfect Chinese bacon-and-egg breakfast, but it's kind of all bacon, all the time as a main dish.
Verdict: Chung King will satisfy a hankering for Sichuan and prices are quite reasonable, but there appears to be some truth to the charge that they're dumbing it down for non-Chinese diners. On the other hand, you won't leave with half of your party hating you for ruining their tastebuds.
Tip: Ask for SPICY if you can really take the heat. Also, you can bring your own wine but not your own beer, since they sell beer there.

i believe the word for spicy/hot is "la"

I definitely thought the food was spicy enough for me. My first visit left me nearly scarred, but I did get to try a greater variety of foods on this occasion.

Hm. I went recently and could barely feel the inside of my mouth from the numbness after an order of water boiled beef. I guess it just depends (or I have a sensitive mouth).

Sku and others, it seems that sometimes they're very spicy and other times not -- and what you say or don't say doesn't seem to make that much difference! Oh well, you takes your chances.

add this to your mandarin restaurant guide :)

Have eaten at this one on several occasions, yet preferred Oriental Pearl when it was here.
However, the Chung King in Rosemead on Garvey serves pig intestines(hello Josh) with all the chiles your mouth could handle. Gave new meaning to heat. Nephew's wife is Taiwanese, so she ordered that dish, knew what she was setting me up for, yet I trooped on, enjoyed it quite a bit, yet would not order it often, as it was too salty, even after asking for no MSG. I think it is the better location of Chung King for heat, if that becomes a criterion in the future.

My bad, the Chung King is in Monterey Park on Garfield. I like China Islamic even better than Chung King, and it is on Garvey in Rosemead, just east of Monterey Park. Went to both within two weeks, confucious set in!!!

Interesting you mention the fried chicken cubes being fairly tame - the time my girlfriend and I ate there they were the second spiciest food we had eaten in all of L.A. (only topped by a couple of the Southern Thai jungle curry specials at Jitlada when Jazz is actually doing the cooking) - however, they were still delicious. Perhaps there are two versions of the dish, since I know it is listed in two places with the same English name but two different numbers? The beef in small pot was only slightly less spicy, but one of the more fascinating and pleasantly funky Chinese dishes I've ever eaten!