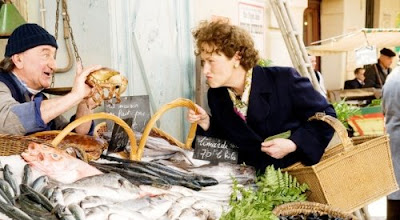 It's going to be fun watching headline writers and film reviewers fall all over each other trying to come up with the most outlandish food analogies to describe Julie & Julia, opening Aug. 7. Variety's Justin Chang says "Meryl Streep's...turn is the freshest ingredient" but otherwise he finds it "overstuffed and predigested." Critic John Anderson agreed (not in a review, but on Facebook) that it's like two movies: One is a fresh hot tasty latte, while the other is a week-old doughnut iced with Crisco."
Ouch!
The bloggers and foodies (here's a great post from Mattbites) who were wooed with early screenings were quite a bit more charitable, although all seem to agree that watching Streep is the main attraction. I'm going to the premiere Monday so I'll report back after I see it...and hopefully catch la Streep in person.

I hear it's great. I can't wait to see it and read the book.

I was enraptured every second that Meryl Streep and Stanley Tucci were on screen. Julie's story just can't compare to Julia's, which was no fault of Amy Adams. But I was able to suspend my normal critical faculties because the Julia half was so totally captivating.