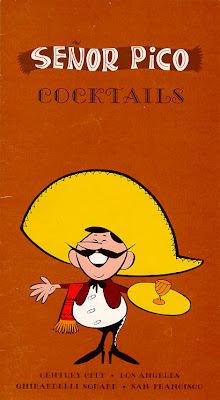 It was fun reading in today's My Favorite Weekend that Peter Bogdanovich used to hang out with Orson Welles at Senor Pico in Century City. I love that Boganovich "doesn't think it's there anymore." Yes, Peter, it was torn down probably around 1980 or so. As a Westside white kid, Senor Pico was one of the few "Mexican" restaurants available to my family until my high 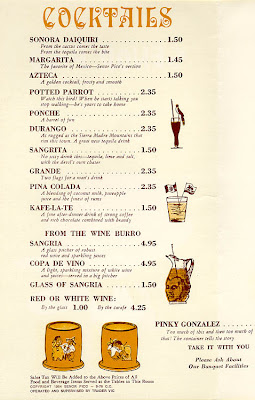 school friends started driving me to El Tepeyac. It was surely not very authentic, but I hadn't realized that Senor Pico, which was and still is owned by Trader Vic's, was quite influential in popularizing the Cal-Mex food that so many restaurants serve today. And Senor Pico survives to this day in Bangkok and I think Dubai or somewhere. I can only imagine what the Thai version of Cal-Mex food might look like.
Here's an excerpt from an article in Nation's Restaurant News about the history of Cal-Mex:

Another creator and popularizer of Cal-Mex food was Victor J. Bergeron, known as "Trader Vic," who in 1933 founded what would become his eponymous restaurant chain in Oakland, Calif. After several Trader Vic's outlets were up and running, Bergeron looked around for other possibilities. He later wrote that he'd had "a mad-on for Mexican food for a thousand years," but he found the real thing "primitive," "greasy, hot and not well prepared." Bergeron spent a couple weeks in Mexico and Texas looking for recipes that he could adapt to the tastes of mainstream Americans. He also popularized the margarita, a drink that likely was invented in bars in Mexico that catered to American tourists.

Bergeron opened a restaurant called "Senor Pico" in San Francisco in 1964 and another one in Los Angeles three years later. By 1973 the Senor Pico restaurants sold more tequila than any other restaurant in the world. The margarita became a foundation stone of the Cal-Mex culinary tradition and a fixture in restaurants and bars throughout the United States.

(menus from the LA Public Library)

I think it was in '78 or so that Senor Pico was converted into a restaurant serving the cuisine of the Princess cruise line. Probably seemed like a good idea at the time.

My parents were inordinately fond of Senor Pico, if only as an upscale change from the El Coyote meals we were subjected to almost every week.

That's funny, Jonathan! For some reason we never went to El Coyote, but for a while we ate giant tostadas at the Sundance Cafe on Robertson every single week.

Hi Jonathan and Pat...I grew up in the SAME 'hood, near Roxbury Park. I remember going to Sweet 16 parties at Senor Pico.
The family didn't go there on a regular basis, however. We frequented El Coyote and El Carmen. My folks (who were married for 61 years) used to go on dates to El Coyote!
I still crave the Chile Relleno and orange cheese on the frijoles at E.C. and go there often! (arteries clogging now).

What a great blog! Just found you! After reading your postings I feel the need to go out and eat!!!! LOL

I worked at Senor Pico in the 70's in the office and as a hostess. What a thrill to meet and greet all of the celebrities . It was a great place for a then young and starstruck to work.LOL Most of the older stars and famous are gone now , but what class most of them had.

Thank you so much for sharing your story. It's very informative. I love to read it and do hope to read your next story.

I remember them fondly! My uncle was the manager that opened the Beverley Hills restaurant (after managing Trader Vics at the Beverly Hilton, earl;ier the Trader Vics in Santurce, Puerto Rico).

His younger brother manager the one in Ghiradelli Square in SF after managing TV in Scottsdale.

I married the sister of two of the Peruvian guys that worked in SF - we've been married for over 40 years !

Mr. Llorens invited my father, Angel Bustamante, to be the executive chef at Senor Pico in Century City. He created many of the recipes derived from the classic Sonoran cuisine. I remember fondly my father's stories of celebrity meals he had to prepare and how proud he was when his cooking was appreciated! Good times!

Was there a trader vics in the burbank or glendale area in the early 80s?

I used to go the Senor Pico's in SF back in the '70's. I loved that place, especially the Potted Parrot cocktail. How I wish I had the recipe!

Worked at Senor {ico's in early 80s in the gift shop. Loved the place the people and the food. My big passion was the wonderful round loaf of brown bread they served and sold. If anyone knows the recipe please post. Thanks for the memories.

Help! Does anyone know the exact recipe for the chile cream cheese balls from SF Señor Pico,s restaurant. What were they coated with on the outside? Green cilies on the inside? I have never had any soooo good! Was there a dipping sauce?

Chico! I'm Tito Diez Canseco's brother and we met you at San Rafael Ca. in 1972 . . . I'm trying to contact your brother, Danny but couldn't find him on Facebook. I'm Memo

It's me Danny (Chico) you may find me still in Atlanta. Same last name first name Daniel