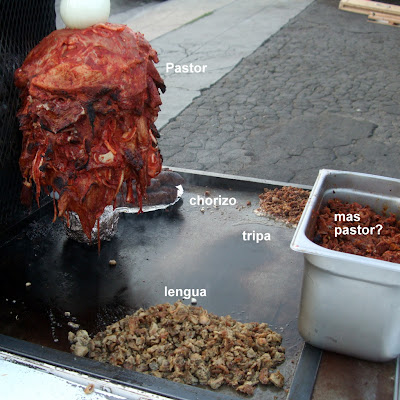 A commentor on my last taco table post suggested the table at Nolden and York, in front of the tire shop, and tonight I needed some meat after living off of corn and veggie burgers for the past two days. The spit of pastor here looks much different from the one just down the block -- there's no pineapple, and it has a reddish hue instead of the crispy burntness of the other place. The carne asada is of the bubbling hot tub variety, rather than the freshly grilled variety. I wasn't loving the carne asada taco, as I prefer it crispier. Plus something I put on it was powerfully spicy, which basically killed my taste buds while I was prepping the two pastor tacos. 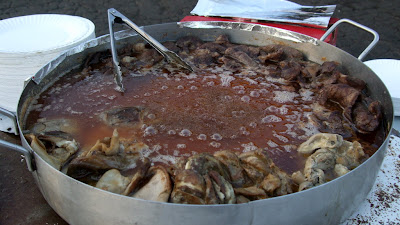 After a glass of water and just a tiny dollop of salsa, I tried the pastor. At first, the sauciness of it was too unfamiliar. The interplay of the meat and a tomatoey base was reminiscent of an Italian grandmother's ragu that had been simmering all day, or a casserole of ratatouille. Normally I like my meats all crispy around the edges, but the pastor marinara of the Nolden stand is a different animal all together, and one well worth investigating.
Tip: All these tables along York only come out after sundown, so don't go looking for them in the light of day.
at 9:42 PM

Stick w/the Pastor at this outlaw cart....the other choices are marginal or unacceptable (asada).

Hi- I've been looking for tacos al pastor with pineapple for ages. Please tell me where that stand is! :)

There's another stand on the north side of York, also near Nolden, that has more traditional pineapple-infused al pastor. Here's a report: http://eat-la.com/2009/03/al-pastor-street-style/

Wow, very nice! :) Thanks for the tip on this Taco Table. Just to double-check, but are they out after dark 7 nights a week? Thanks!