Jonathan Gold's Standard: 14 carats out of a possible 24 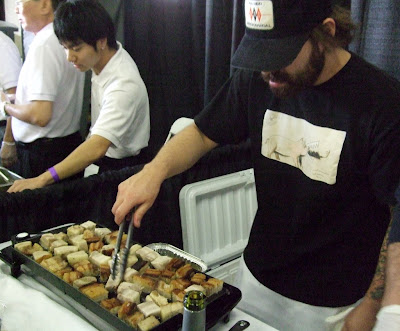 With 29 restaurants, dozens of wineries and several hundred hungry foodies, it was inevitable that we wouldn't get to taste everything at the L.A. Weekly's first (annual?) Gold Standard event. But given the daunting task of organizing such an event (one restaurant owner explained that both the health department and the fire department had made several nitpicking passes before the event opened), the Gold Standard mostly did what it was supposed to: exposing people to a L.A.'s vast range of fascinating restaurants. We got there fairly close to opening time, and quickly scored pretty much the best taste of the festival: meltingly luscious chunks of pork belly with kimchee from Animal. Alas, the lines grew quickly after that, and we never tasted the fresh mozzarella at Mozza, caviar at Sona or the Mexican delights of Babita and La Casita Mexicana. But at least I was able to introduce my friend Beth to the fiery, crispy wings of Kyochon, 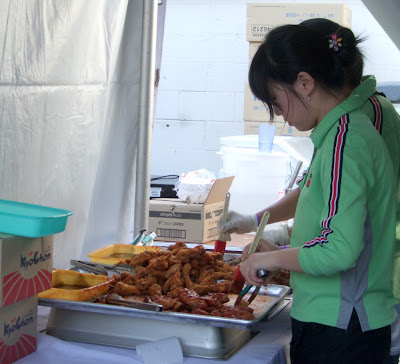 (above) who magically kept their chicken crispy and hot; to Jazz's famous rice salad from Jitlada and to the friendly bacalao purveyors at Lou. We also enjoyed duck with kumquats and frisee with quail eggs at Anisette; loved beet risotto cakes with pulled pork at Upstairs 2; more pulled pork on polenta at Palate and smoked salmon with dates at the Hungry Cat. Not surprisingly for an event with J. Gold's stamp on it, pork was in ample supply. Many food critics get less excited about desserts, and it wasn't a dessert-heavy event although we liked Clementine's banana pudding and chocolate cherry cookies and Providence's chocolates, and were happy to try Lamill's coffee after all the wine. I'm guessing next year this event will have to move to a venue with better crowd flow, but it was still fun to try all those things while Gold and his wife and kids wandered around chatting with guests.
Those who managed to try 20 or more restaurants probably have much more eating stamina than we did, and EatingLA bows down to their appetites. I'll link to them if those pork-stuffed lazybones ever get around to posting.
Here's some Chowhound reports.
Here's one from UncouthGourmands.
And here's a list of suggestions for next time:
1) Book a larger venue, like Barker Hangar in Santa Monica, with no narrow passageways between rooms;
2) More trash cans, and empty them throughout the event;
3) Better check-in procedure at the door -- there's really no reason for a line just to get in; and
4) I'm not sure how to fix the long lines for food. They have to be able to sell enough tickets to put on the event -- maybe encouraging the restaurants to prepare the plates more efficiently would help this dilemma. 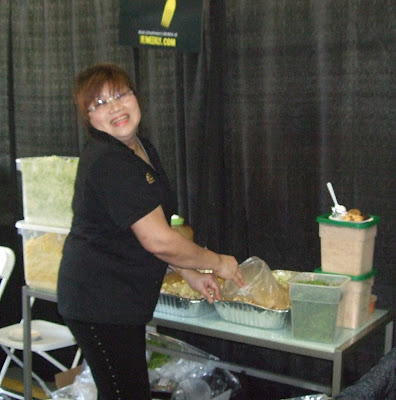 ps: To those who couldn't get in or got in late because of valet parking problems, I only half feel badly for you. We parked a couple of blocks away, which made a nice walk afterwards, and there's plenty of parking at Target too. Learn to deal.

I had a great time at the event! I just with there'd been more tables and trash cans. What a mess!

I had a crazy fun time, but agree with everything you say here. Thanks for the recap!

On of the best times I have ever had. So much good food and so many friendly chefs to see and converse with. But yes, the venue needs to change. Way to many bottle necks. I hit just about every booth and my stomach still hurts.

I also never got to taste the fresh mozza from Mozza, the line was too long!
They definitely had a great selection of food, but yeah, better planning/ executing next time, I hope.

YHBHS said...
This comment has been removed by the author.
11:51 AM

YHBHS said...
This comment has been removed by the author.
11:57 AM

Photos from the event courtesy of L.A. Weekly

It was messy and crazy, but I loved it. I tried everything but the slippery mozzarella from Mozza, which I saw more of on the floor than on plates and the pork from Animal. We loved the uncrowded baguettes from Mr. Baguette and Clementine's cookies were a lovely surprise. I think the chefs wanted to chat and that held up many of the lines, but it wasn't annoying, just more time to linger and people watch and gab ourselves.