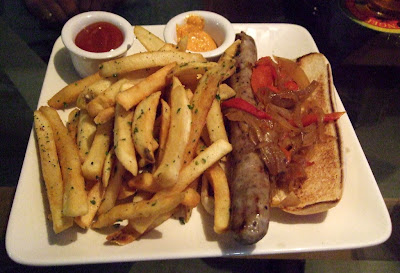 Let's Be Frank bratwurst with fries

With its funky mix of oldtime delis, thrift shops, slick record stores for djs and Yiddish music shops, Fairfax Ave. has always been where alternative meets yenta. In the swinging '60s, Fairfax was ground zero for head shops and oddball coffeehouses in the vein of Nova Express, which formerly occupied the space that owner Jason Bernstein has turned into Golden State. He spent months clearing out the faded auras of underage William Burroughs fans, and the remodeled space is airy and casual with brick walls and an open kitchen.
Four or five taps showcase a carefully curated selection of rotating beers (most at $6 a glass), with extensively annotated tasting notes available to study the choices. Breweries featured include Craftsman, Green Flash and Bear Republic.
The smartest new restaurateurs are building on the best-quality local products to stock their menus. Chef Samir Mohajer, owner of the Cabbage Patch, consulted on the menu which includes natural sausages from Let's Be Frank, Craftsman beers, and Scoops ice cream. It's the first place to buy the famously eccentric Scoops outside of Hel-Mel, and Tai Kim created special flavors for Golden State including chocolate sorbet with Green Flash IPA and Sauvignon blanc pear sorbet.

Jeff liked his Farmhouse burger with Harris ranch beef, Fiscalini cheddar and brown sugar bacon, and I tried a savory bratwurst. Sweet potato fries were more baked than fried; tasty but it takes a fork to eat them. Regular fries with curry ketchup and hazelnut romesco sauce went mighty well with my complex Allagash Curieux barrel-aged beer, the only one they carry from outside of California. We sampled a bit of the menu, but I'm sure I'll be back for lunch soon as I want to try the jalapeno cabbage slaw and grilled cheese sandwich (no booze before 5 pm on weekdays though -- too close to Fairfax High.)
Here's more on the great fish 'n chips at Golden State.

Went here the other day--it's a nice addition to the neighborhood!

Oooo...thanks for the suggestion. We'll definitely try this place 'cause it's in our neighborhood!

I really liked the muffaletta and the caponata. Everyone around me was talking about how great the sweet potatoes were -- I'm definitely going back to try those.

Loved the sweet potato fries and the sausage. Husband loved the Craftsman beer - The owners are very knowledgeable and had lengthly discussion with husband about all things beer related. Teenagers went for Scoops ice cream. These guys are so hospitable, you won't be disappointed.

Great beer but where's the beef? Ten dollar burger was the size of a slider, the seven dollar dog was small and there were about 5 sweet potatoe fries on the side-NOT like the picture above. Way too expensive for what you get=not worth it.

Great beer but where's the beef. Ten dollar burger was the size of a slider, the seven dollar dog was small, and there were about five small sweet potatoe fries on the plate-NOT like the picture above. Way too expensive-not worth it.