Ondal 2: Life is a bowl of crabby bliss 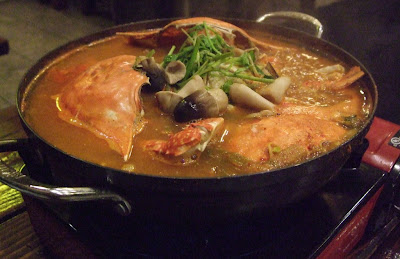 It's always more fun to eat when there's a little showmanship with the meal. In the old days, this kind of thing was much more popular, with Lawry's mixing up Caesar salads tableside and no end of flaming crepes suzette desserts. Nowadays, tableside preparation is more likely to be found at Korean restaurants. At some, you cook your own meat on the grill in the center of the table; at the nicer ones, the server cooks your meat for you. The crab stew at Ondal 2 has got to be one of the more elaborate presentations. Tipped off by Mattatouille's very comprehensive description, we ventured to the southern fringe of Koreatown with Food GPS. We three very white, very non-Korean speaking diners were happy to find a friendly server who was happy to explain each step. As my father used to say at the Passover seder, here's the Cliff's Notes version of the meal.

While there's quite a few hotpot-style dishes on the menu, the specialty is crab stew. Three flower crabs (similar to blue crabs) will feed three to four people for $55, including all the copious side dishes. The meal starts with a nice selection of panchan including raw sliced sweet potato, potato salad, sweet seaweed dust, octopus, egg custard, a whole mackerel pike fish and chili-coated crab legs (above). Then the hotpot arrives with three crabs stuffed with rice and crab meat. Each diner gets a crab in a bowl of broth, and you scoop bits of roe and meat out while spooning up the broth. When the crab shell is finished, there's still enough soup, thick with mushrooms and bean sprouts and crab legs, for seconds and thirds.
The broth is rich with crab flavor, almost creamy, with a flavor profile that most resembles a spicier version of Provencal soupe de poissons. While there's still some broth in the pot, the dough lady arrives with a fistful of raw noodle dough, which she drops into the broth to simmer like homemade rustic pasta. After all the apps and several bowls of soup, we're starting to get full when the fried rice arrives.
Then the server cleans out the pot and stir-fries cooked rice, kimchi, onions and other vegetables. The rice picks up some flavor from the crab left in the bowl, and all the flavors meld together into some kind of tangy, spicy, rice happiness. The server suggests sipping cold kimchi juice to cut the richness and spicyness of the rice, but we find that a little de trop -- the fried rice alone is delicious enough.
A final bowl of cold barley soup is a refreshing finish to a long meal, although at stop at a Pinkberry or Red Mango after would be an appropriate as well.
A trip to Ondal 2 is well worth venturing outside of Koreatown proper, as much for the ceremonial pasta-cooking and rice-frying as for the richly-flavored stew.
Tip: Order the broth "slightly less spicy than medium" if you don't want to lose your taste buds before the rest of the courses arrive.

My husband went here without me one night! I was sad to miss this. :(

I went there last month w/ 3 others and we barely finished our meal. My fave was eating the rice from the crab shell.

Weird! I JUST wrote about my meal at Ondal 2: Spicy Korean Hotpot at Ondal 2.

I love that place.